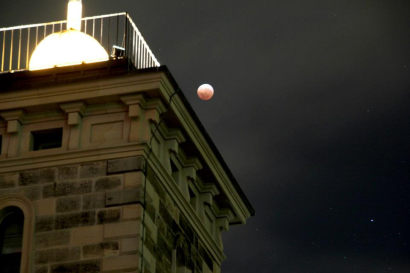 The time ball tower of Sydney Observatory with the eclipsed Moon on the night of 10 December 2011. Image Geoff Wyatt, Syney Observatory

On the night of Saturday 10 December hundreds of people and Sydney Observatory saw the Moon turn red. Many other people saw the same wonderful sight from their own backyards.

Fortunately, we are able to enjoy this phenomenon as one of the great spectacles that can happen in the sky without the fear that beset people in the past – in a famous story Christopher Columbus frightened the natives of Jamaica with a Moon eclipse in February 1504 so that they would provide supplies for his ship and crew.

Let us consider why the Moon turns red at times of eclipse. Geometrically, is should become completely dark as during an eclipse it is completely within the dark shadow of the Earth. The reason why some light, and usually reddish light, lands on the Moon is that some light reaches it through the Earth’s atmosphere.

How this light passes through the atmosphere is considered in a recent research paper by two Spanish astronomers, A. García Muñoz and E. Pallé, titled Lunar eclipse theory revisited: Scattered sunlight in both the quiescent and the volcanically perturbed atmosphere, in the Journal of Quantitative Spectroscopy & Radiative Transfer.

The geometry of an eclipse of the Moon with the insert showing an astronaut’s view of the Earth during an eclipse. Drawing Nick Lomb

Light is bent or refracted as it passes through materials of different density, for example, as it passes from water into air or from air to glass. Similarly, as the Earth’s atmosphere is less dense at the top and becomes increasingly dense towards the Earth’s surface, it also bends light passing through it. This means that during an eclipse some sunlight is bent towards the Moon.

The light reaching the Moon is red for the same reason that sunset is red, that is, blue light is scattered out of the beam of sunlight and what is left is red. There is also some light that is scattered towards the Moon, but under the condition of a reasonably clear atmosphere that light makes only a small contribution to the overall brightness of the Moon.

If there has been a recent volcanic eruption that had placed lots of small particles in the atmosphere, the situation is different. According to García Muñoz and Pallé, in 1991 after the eruption of Mt Pinatubo, the amount of bent light transmitted through the atmosphere dropped by a factor of over a thousand while the scattered light was slightly increased. Hence under those circumstances the two methods of transmission became comparable, at least in visible light.

The brightness and the colour of the Moon during a total eclipse, and how these vary across the disc, depend on factors such as the cloudiness in the regions of the Earth where it is dusk or dawn as well as the amount and size of dust particles suspended in the atmosphere. Hence to atmospheric scientists a total eclipse of the Moon provides a rare opportunity to study the state of the atmosphere in some detail.

For most of us though a total eclipse of the Moon is a chance to enjoy a spectacular show in the sky. We will need to wait until 15 April 2014 to see another – from Sydney that will be an interesting one with totality visible in twilight.