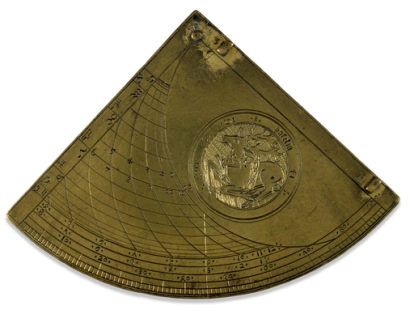 The front of the Richard II quadrant in the British Museum, showing equal hour lines and the stag with a crown – the badge of the king. This instrument dating from 1399 is very similar to the horary quadrant discovered in Queensland and is probably from the same workshop. Courtesy of the Trustees of the British Museum

According to news reports, as a child Chris Becker found the rare brass quadrant in a bag of pipe fittings. It was only at the start of 2011 that he realised what it could be and contacted the British Museum in London to verify its significance. 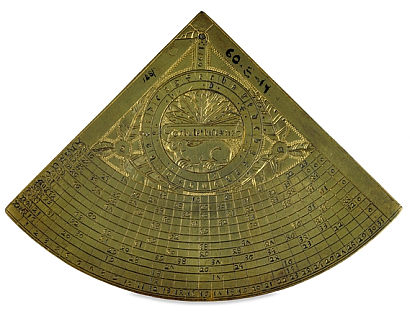 The lot description in the auction catalogue gives a detailed description of a technique by which the quadrant could be used to determine an approximate hour of the day. It involves obtaining the maximum elevation for the day from the table and then sighting the elevation of the Sun. Note that the user, of course, would not have looked directly at the Sun as that is dangerous and can lead to blindness. Instead the quadrant would have been lined up using its shadow.

An interesting aspect of the quadrant is that it used equal hours, that is, each hour was 1/24th of a day. Up to the 14th century unequal hours were more commonly used. These divide the time between sunrise and sunset into 12 and similarly the time between sunset and sunrise into 12. Not only did these give rise to unequal hours between day and night, but they also meant that the length of both the daytime and night time hours varied with the seasons. It was only with the development, near the end of the 14th century, of mechanical clocks that kept time at a constant rate that equal hours began to be adopted.

The quadrant is to be auctioned as part of an auction of scientific instruments and timepieces on Tuesday 13 December 2011. The auctioneer’s estimate is US$230 000–310 000 though it is such a rare piece that any estimate of its value must be highly uncertain. I hope that this important scientific instrument ends up in a museum on public display. Any public benefactors out there who could bid for it and then donate it to the Powerhouse Museum? It would be a valuable asset as, due to the country’s relatively short European history, there are no such early astronomical instruments in Australian museum collections.

4 responses to “King Richard II’s timepiece is to be auctioned in London next week: what was it doing in Queensland and what did Richard do with his ‘equal hour horary quadrant’?”