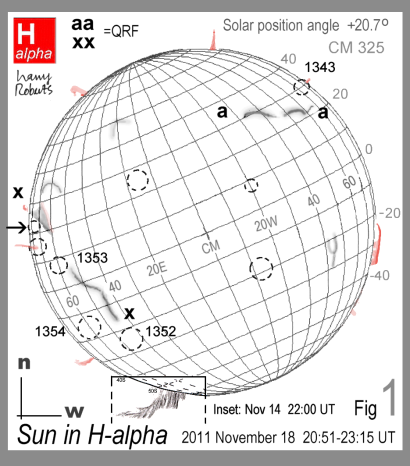 A sketch of the full disc of the Sun on 18 November 2011 (UT) with three dark filaments. Image and copyright Harry Roberts ©, all rights reserved

At times, the sun hosts large stable structures called filaments. As discussed previously, they arise between areas of unlike magnetic polarity where they trap cooler material within “walls” of horizontal field.

Over a decade I have noted that filaments vary in length, density and width over the solar cycle. When my H-alpha viewing began, in June 2001, there were many long dark filaments on the disc – while during the recent minimum they were mostly absent.

Zirin’s Astrophysics of the Sun p266 makes the distinction between the active region filaments, or ARF, that occur within spot groups, and the quiet region filaments, QRF, that are found at higher latitudes, well above current spots. This latitude preference helps determine whether any filament is an ARF or a QRF; the latter form in the “quiet network”. Schrijver and Zwaan warn that, “The distinction between plages, enhanced network and quiet network are not sharp” (Schrijver, C and Zwaan, C “Solar and Stellar magnetic Activity” Cambridge Uni Press, 2000. P7). 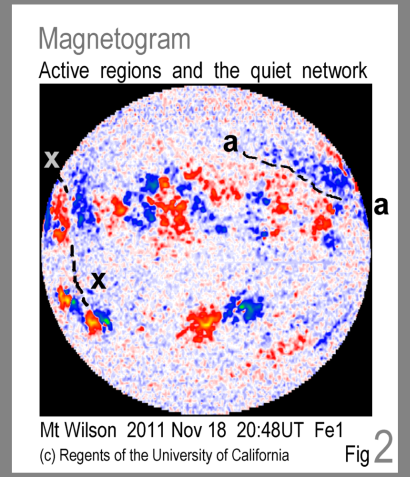 Magnetic fields on the Sun on 18 November 2011 (UT). Courtesy Regents of the University of California

All sunspots are bi-polar (even spots of single polarity show transition arches connecting to following polarities where no spots are visible-yet the bipolar form is preserved), i.e. if preceding (p) spots have polarity N say (i.e. magnetic north), then the following (f) spots will be of opposite polarity, i.e. S (south). As well, sunspots have an untidy plume or “streak” of fragmented polarity on their eastern sides (The product of solar differential rotation and poleward meridional flow Ibid. P162), seen in some magnetograms (Fig2). As the solar cycle advances these plumes (streaks) drift pole-wards, where they slowly neutralise the pole’s current magnetic field. (Confused?) This process finally reverses the sun’s magnetic poles, a year or so after solar maximum (Zirin, P308).

Compare the two types of filament and we find ARF are often short, black and sharply curved, due to strong fields in nearby spots (thousands of gauss). These fields in spot groups are complex and tangled, and flares often shatter the uneasy peace – when an ARF erupts into space, it is followed soon after by a flare (Zirin, P344).

The QRF, however, lead more placid lives: they arise in the quiet network in zones between the plumes of weak field (5 to 10 gauss, just 1% of AR fields).

Yet the QRF form readily enough, are stable for longer than the ARF, and as the magnetic plumes straggle over vast areas, so the QRF can grow very long indeed. Their longevity means more material can accumulate and the resulting filaments (prominences at the limb) may be both long (across the disc) and tall (in height). So it is that larger prominences tend not to associate in latitude with current spot groups.

QRF erupt slowly, and may cause a Hyder flare – a faint and “slow-burning” event compared to an AR flare.

The magnetogram (Mt Wilson, Fig2) shows adjacent plumes of quiet region polarity where the filament (a-a in Figs) was formed, trailing ~90º NE of several active regions including 11343. The red and blue plumes are opposite fields of 5 to10 gauss. Note: Fig 1 must be rotated 23º clockwise to match the magnetogram, where solar Po is at zero.

On the NE limb a wedge-shaped QRF was sited at +22/248 (near AR1135), part of a longer entity still rounding the limb. Although dark, it had only a low prominence above it, but it “blanketed” the chromosphere, with a bright base on its NW side (Fig1). I surmise that both eastern ARF are part of one long filament – the whole labelled x-x in the figures – that crossed >50º of latitude in both hemispheres! 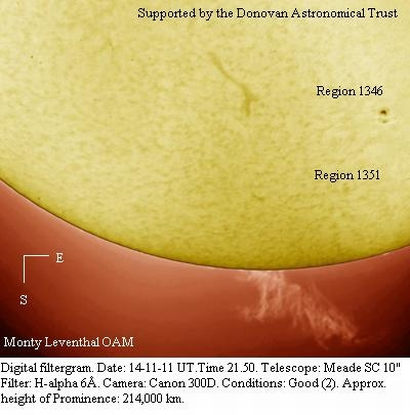 A prominence imaged in the red light of Hydrogen atoms on the edge of the Sun on 14 November 2011 (UT). Image and copyright Monty Leventhal OAM ©, all rights reserved

Shown in the inset in Fig 1 is the huge but faint ejection of another QRF, four days earlier– a slow moving event of great height, seen by many around the world (Fig3). It was sited “high” in the southern quiet network (-50º), and may reappear at the western limb. I logged neither a Hyder flare nor a filament at the site, so it may have been a “far side” ejection.

Previously, SC24 filaments were mostly short and faint – but recent logs suggest the strengthening of quiet region fields – to the point where much longer, darker filaments can form, at last, and endure for greater periods – a welcome development. Watch this H-alpha space!