After a sweltering day under the southern African sun, the stars would come out to shimmer and shine in the sky. The sight was something to behold and I was fortunate enough to witness this over eight weeks as the resident astronomer at Sossusvlei Desert Lodge, Namibia, from December 2010 to February 2011.

The Sossusvlei area is home to some of the largest sand dunes in the world, and many of you may have heard of or seen photos of one of the most photographed dunes in the world, Dune 45. The lodge is situated just over 60km from these dunes themselves and is very much nestled in a desert region.

Deserts are great places for astronomical viewing due to them generally being dry and having clear skies. Here at the lodge, the closest tiny town is over 80km away, and the large cities are all well over 300km away. No other lodges are within sight, so there is hardly any light pollution. The lights leading up to the raised outdoor observatory are even thoughtfully lit up with red lights! Thus, many guests were in absolute awe over the sight of so many stars, and were quite astounded by the sight of the Milky Way splashed across the sky.

Depending on the moon – its light makes a huge difference to the viewing – we were able to see naked eye the two Magellanic Clouds and Andromeda Galaxy. We challenged each other to count as many of the Pleiades as we could; most managed nine. Through the 12-inch telescope, we had clear views of spiral galaxies and open and globular clusters, the latter of which was described as broken glass because there were just so many stars. Some people assigned certain nebulae with new shapes, deemed more suitable than their official names. Jupiter, the king of the planets, was often the star of the show (no pun intended!) with many coming to the telescope night after night in order to see for themselves whether I was truthful about the four Galilean moons of Jupiter changing positions every night. Not one person was not taken aback by the fact that they were looking far, far out into space and therefore far, far back in time. Out there in the middle of the desert, I shared many a quiet and contemplative moment with our guests.

Inspiring astronomy aside, there was plenty to keep this particular astronomer amused during daylight hours. Birds, mammals, reptiles and insects galore were out there to see, not to mention the stunning scenery that surrounded us. For any of you going, the slog up the dunes is completely worth it for the run down.

The great thing about astronomy is that it can be done anywhere, weather permitting of course. You don’t need anything special and besides, if any of you are like me, you have binoculars with you anyway. Whilst you’re somewhere away from home anyway, why not cast your gaze up to the night sky? If you’re at a different latitude to home, it will give you a new perspective. Who knows, perhaps astrotourism will take off (pun absolutely intended). 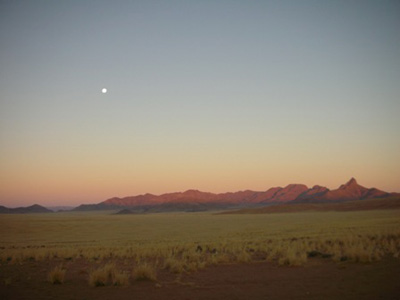 Kate is Sydney Observatory’s resident travelling astronomer. Stay tuned for her next blog on the Sub Antarctic Islands.