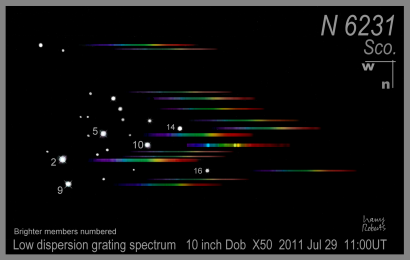 A sketch of the low dispersion grating spectra of the brighter stars of the cluster NGC6231. Image and copyright Harry Roberts ©, all rights reserved

I noted the striking Zeta Scorpii region when taking my “first ever” look at the winter Milky Way (on a 5 am fishing trip around 1960). With a small ‘scope I had been exploring the summer skies, unaware that the sky rotated annually – where had all these new star fields come from?

Conspicuous amid the billows of nebulosity was a small curved cloud, like a comet. Bino’s showed it was a sprinkling of stars and clusters behind “bright triple” star, Zeta Scorpii. One of these is the rich cluster NGC6231 – a beautiful sight in any telescope.

Much later Burnham’s “Handbook” identified two rare Wolf-Rayet stars in the cluster, but first attempts with a Baader Spectroscope showed nothing special in the spectra of the cluster members.

The Baader Spectroscope is a slit-less design: it passes the point-like Airy disc of a star through a small diffraction grating. The grating is not “blazed”, and it produces 1st, 2nd and 3rd order spectra – so the field of view for a star cluster is crowded with the various spectra and the ‘zero order’ images of the stars themselves. However, on a good night in the Blue Mountains (1980’s) the C8 resolved a single faint line in the spectrum of one of the cluster members, #10, a known WR star!

Seeing details in the spectrum of stars fainter than magnitude three, say, is rare – there’s not enough light available with amateur ‘scopes. As well, the optics widens all stars in the FOV into streaks that may seem to be bright bands when, by chance, they fall within the spectrum of another star.

Lately I have been reviewing stellar objects with the widening optic removed. The star spectra are now linear, and of course much brighter – and sometimes, they show features not previously visible.

When #7 showed no detectable details I moved on to the more central but fainter star, #10. To my delight bright emission bands were obvious in this star! In the past this spectrum had shown only the one faint line: this was the bright blue band I now saw in the linear spectrum (Fig). While it resembled the H-beta line of star Eta Carina, it is in fact a carbon line (the ‘C’ in star #10’s spectral class WC6).

But there was now more to see: in the yellow and orange were two strong emissions – both I think are helium bands. I recognised these emission features from the brightest WR star in the southern sky, Gamma Velorum (WC7, mag 1.9), where the emission bands are spectacularly obvious.

Returning to star #7 I studied the spectrum more closely. This is a WN7 star, where N is for nitrogen. I could see only hints of bands in parts of the spectrum; I needed more aperture for this star. Accordingly, the figure only shows the central core of cluster N6231, with star #7 outside the FOV.

The figure was compiled from the eyepiece sketch of the field. The stars were mapped as well as details of the spectrum of #10. The other stars in the field had continuous spectra: all are types O and B without strong features. Some fainter field stars have been omitted for clarity, as their spectra did not ‘excite’ colour vision.

That the spectroscope in linear mode shows detail in stars fainter than mag. 6 suggests there are many other stars in which details may be seen. Remember that stars with emission features are rare in the night sky, as are the Wolf-Rayet’s, and exotic “creatures” when compared to the vast majority of stars.

The O and B members of N6231 would show finer details in high-resolution spectra. All the stars of N6231, including the WR stars, are massive, bright and very hot. While much like the Pleiades, this cluster is many times more distant – were N6231 as close as the Pleiades it would outshine the latter by fifty times, with the brightest stars equalling Sirius!

We may echo the words of Agnes Clerke who wrote in 1888 after apparently viewing Gamma Velorum’s spectrum, ‘An intensely bright line in the blue, and the gorgeous group of three lines in the yellow and orange render the spectrum incomparably the most brilliant and striking in the whole heavens.’

Spot on, Agnes! Both in regard to very bright Gamma Vel, as well as much fainter star #10 in N6231. Beg, borrow or build a spectroscope: these two WR spectra are “see before you die” sights. And the tiny but bright bands of star 10, glowing amid the bland spectra of its companions, are a very rare sight indeed in amateur astronomy!