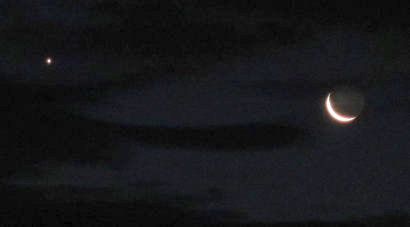 Venus and the crescent Moon were in close proximity in the western sky on the evening of Sunday 27 November 2011. Image and copyright Nick Lomb ©, all rights reserved

On 6 June 2012 Venus will cross in front of the Sun for the second time in recent memory. The previous occasion was on 8 June 2004, but the next will not occur for 105 years, not until 11 December 2117. Although, unless there are unexpected medical breakthroughs, not many of the people alive today are likely to be still alive at that time, it’s still fun to speculate what the world will be like when that transit takes place during the Australian summer. At the recent launch of my book, Transit of Venus: 1631 to the present, I suggested that in 2117 it will be possible to take hyperflights to Los Angeles in 30 minutes and to London in 40 minutes, but there are many other scenarios, both good and bad.

In the image above Venus and the crescent Moon are close together in the sky. Venus also shows phases like the Moon, however, its phases can be very different. If we had looked at the planet through a telescope on the evening the photograph was taken, 27 November 2011, we would have seen Venus as gibbous and almost showing a complete disc. As well, its angular width was only about 11 seconds of arc. The reason for the almost full disc and the small apparent size is that Venus is still on the other side of the Sun to the Earth – it was at superior conjunction (see diagram below) on the far side of the Sun on 16 August 2011 and now it is starting the long trek to inferior conjunction on the day of the transit. 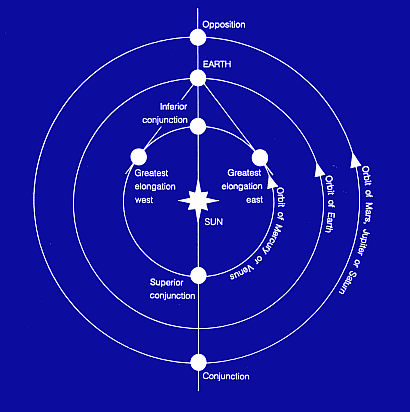 Diagram indicating where the inner planets are with respect to the Earth at superior and inferior conjunctions as well as the outer planets at conjunctions and oppositions. Diagram from the 1993 Sydney Observatory Almanac, courtesy Powerhouse Museum

Venus takes 225 days to circle the Sun while the Earth takes 365 days. It is easy to show with a little arithmetic that the time between superior or inferior conjunctions of Venus is 584 days or 1.6 years. The easiest way of interpreting the diagram above is to think of the Earth as stationary with respect to the Sun and Venus taking 584 days to complete one circuit.

At inferior conjunction Venus is at its closest to us and has an apparent size about six times that at superior conjunction. This time the planet moves from being visible in the evenings to morning visibility with only about eight days lost in the glare of the Sun.

Transits of Venus can only occur at inferior conjunctions. They do not take place at each inferior conjunction as the path of Venus around the Sun is tilted with respect to that of Earth so that at most occasions Venus is either above or below the Sun. Only on rare occasions, roughly twice a century for the moment, is Venus in the right position for a crossing or transit to occur.

From now until 6 June 2012 Venus is on its inexorable journey towards inferior conjunction and the final transit for 105 years. Only 190 days to go!