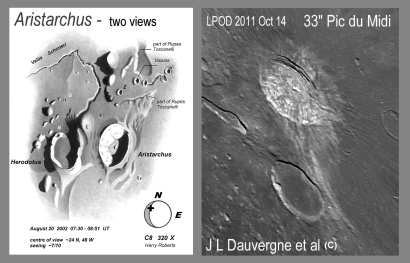 A sketch and a photo of the Aristarchus region on the Moon. Sketch: Image and copyright Harry Roberts ©, all rights reserved Photo: Jean Luc DAUVERGNE, Philippe TOSI and Elie ROUSSET, IMCCE/SP2/Obs MIDI Pyrénées

Secretly perhaps, many of us who point a ‘scope at the Moon hope to see some unexplained transient event – a TLP or transient lunar phenomenon (LTP for Americans, I believe). Sadly, such things have become rare in recent decades. They were however in plague proportions in the 1950’s, with many eminent amateurs (and some professionals) logging a TLP. In our era of high-resolution lunar photography where have all the TLP’s gone? A brief history of them might be of interest.

TLP’s go back a long way. Consider the five monks who in 1178 saw the “upper horn of the new Moon split and …fire, hot coals and sparks spewed out”. This spectacular report has been attributed to the impact that formed crater Giordano Bruno just behind the Moon’s NE limb. There is some evidence for this but, until precise dating of that crater is available, it remains an unlikely possibility.

Early in the telescope era amazing lunar changes were “recorded”. Most famous perhaps is the “sudden disappearance” of the crater Linné in western M. Serenitatis, mapped (wrongly) as a ten km wide crater in 1837, but found by Schmidt in 1866 to have “vanished”, leaving behind a brilliant white patch. It’s worth taking a look at Linné in a modern scope with good seeing conditions – detecting the 2km wide crater at the centre of the bright patch is always hard, and reminds us of the challenges facing lunar mappers early in the 19th century.

The mid 20th C was the heyday for TLP’s. Speculation about the Moon’s composition was rife before the Apollo landings– with all kinds of theories in play. As well Earth based photography was then poor compared to current amateur imaging. Many amateur groups had TLP-search sections – and they were not idle: TLP’s were logged by the hundreds!

Most commonly seen were “fogs”, “hazes” and “bright glows”, often coloured. So many were seen that maps of the most prolific sites were compiled, and section leaders published the future dates and times when near-exact repeats of lighting and libration would occur, to test if a past event was just a “trick” of lighting or such-like.

Most “true-believers” felt they had seen some kind of volcanic eruption – and it was then widely thought that the Moon’s craters (big and small) were due mostly to volcanism.

Caution and skepticism were early casualties: some believed the transient bright bands in Aristarchus (the most “active” of TLP sites, Fig) were due to vegetation that thrived on gasses venting from fissures in the crater wall. Others routinely “saw” a haze spread across Plato’s floor obscuring the tiny craters on its surface (I find they’re always hard to see).

Most of this was innocent enough, until in 1958 the Soviets published “convincing evidence” that the central peak of Alphonsus (a known “TLP hotspot”) had vented hot carbon gas. The evidence convinced many major scientists – but with hindsight may have been Cold War disinformation. We can only speculate on the Soviets motive.

A US Ranger probe targeted on the “eruptive” peak found no trace of volcanism, and all recent work is also negative – Certainly the event has not recurred.

Editor willing, we may revisit some of this TLP history in a future article (or two). To open the TLP discussion I attach a sketch of the Aristarchus region together with a superb recent image of the crater, the site of so many TLP’s (Fig). Perhaps all the bright spots on the rim and wall of this crater have been reported as a TLP at one time or another.

Paradoxically, there are plenty of lunar volcanic sites within reach of amateur telescopes – but none, to my knowledge, have ever been the site of a reported transient lunar phenomenon!