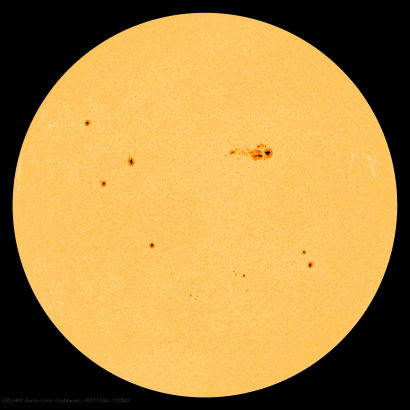 Many sunspots are visible in this image of the Sun from the Solar Dynamics Observatory taken on 9 November 2011. Courtesy SDO/HMI

Today we are fairly knowledgeable about the Sun. We know that sunspots come and go on the Sun with a period of approximately 11 years and that spots are regions of intense magnetic fields. Sunspot groups have spots of two different polarities and the order of these polarities reverse in a cycle that is double the length of the normal 11-year cycle. These ideas are often discussed by Harry Roberts, a valued and regular contributor to this blog, for example in this recent post.

Having come across an article in the Scientific American of 10 May 1884 (pages 288-289), it is interesting to note what was known at that time and when scientists discovered the all-important magnetic fields on the Sun.

The article starts off with what is still a familiar discussion on when the maximum of the sunspot cycle would take place. In 1884 the number of spots on the Sun was near the peak of a relatively low sunspot cycle and the article quotes a number of eminent astronomers disagreeing on whether solar activity was increasing or decreasing. For the record looking at a graph of sunspot numbers indicates a peak in 1884.

The article states that little is known about the Sun though noting that there was an ‘inexplicable tie’ between auroras and magnetic disturbances and sunspots. It then says,

Whether the solar activity is the cause of the earthquakes, volcanic eruptions, cyclones, tornadoes, and the disturbances that follow in their train is a problem yet unsolved. The sun hides his secrets from mortal ken ; we do not even know his exact distance or diameter, nor can we expect in the present attainments of science to find out the cause of the spots with which the sun’s fair face has been pitted and marred for several years.

That sunspots are due to magnetic fields was discovered by American astronomer George Ellery Hale 24 years after the Scientific American article. In 1908 Hale, observing with the newly-built 60-foot (18-metre) solar tower, used a special prism to examine the polarisation of the light from sunspots. With a spectroscope the light can be broken up into its component colours and specific wavelengths or lines due to ions of particular elements can be seen. In previous work Hale knew that some of these lines are in fact close doublets, that is, instead of one spectral line due to an ion there are two that are very close in wavelength.

On 24 and 25 June 1908 he found that these doublets are polarised, that is, the radiation from the ions vibrate in specific directions. Furthermore the two components of the doublets had opposite polarisations. Hale said,

Photographs like these seemed to leave no doubt that the components of the spot doublets are circularly polarised in opposite directions. Since the only known means of transforming a single line into such a doublet is a strong magnetic field, it appeared probable that a sunspot contains such a field, and that the widening and doubling of the lines in the spot spectrum result from this cause.

Thanks to George Ellery Hale and his successors we know far more about the Sun and its spots than scientists did back in May 1884 when the Scientific American article was written. Still there is much more left to be discovered about our nearest star, so keep reading the posts on this blog for updates!

15 responses to “Sunspots and magnetic fields – when did scientists discover the connection?”