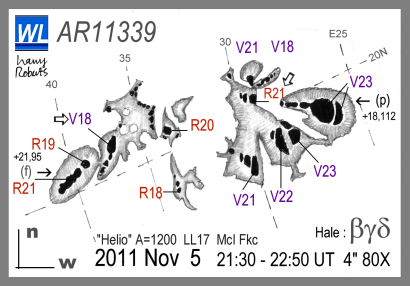 A sketch of the giant sunspot group AR11339 on the morning of 6 November 2011 (EDT). Image and copyright Harry Roberts ©, all rights reserved

We earlier viewed this very large spot group as it began to move from the east limb onto the disc – noting that NOAA first assigned it magnetic class beta-gamma-delta on the November 3 (Universal Date). What exactly does this mean?

G E Hale created the magnetic classification system in the early 1920’s, having discovered the essential magnetic character of sunspots (mostly at Mt Wilson). In the sixties, a final refinement was added to the system:

The delta configuration, the most active of active regions, was first defined by Kunzel (1960) as two or more umbrae of opposite magnetic polarity in a single penumbra. Kunzel showed that the delta groups were far more active than the other classifications. (Zirin, ‘Astrophysics of the Sun’, p335).

Delta groups are responsible for almost all great flares” (Zirin and Liggett, 1987.Ibid.)

As solar rotation carries AR11339 across the disc, the true length of this giant group becomes apparent, since earlier logs showed the group foreshortened by perspective. On the sixth (local, 5th UT) the group’s size is obvious: one page of the log is too small to record its full east to west extent – and two pages are taped together!

The group has now divided into a preceding (p) part and a following (f) part – and the (p) part has violet (V) polarity while the (f) part is red (R).

But Mt Wilson’s daily sketch of Nov 5, 15:30 UT (observer Steve Padilla) showed that not ALL preceding polarity is violet! Padilla has logged the tell-tale signs of delta configuration.

My own sketch of AR11339 took about an hour, after which the current Mt Wilson umbral field data (made 8 hours earlier) was added to my record (Fig). For clarity I show the fields in colour – it is clear that a compact pair of spots with opposite polarity have emerged (block arrow) near the centre of the (p) component of the big group. Note how all the violet umbrae seem to have aligned themselves radially to the emerging opposite polarity – is this effect real?

As well, in the (f) half of AR11339, also near the centre, a violet spot (or spot chain, also arrowed) is emerging in the otherwise all-red region! Both parts of this big group now show delta configuration – and as I write it’s hosting M-class flares about every 4 to 5 hours! How long will this configuration last? Time will tell.

Flare-hunters – keep the H-alpha ‘scopes at the ready!