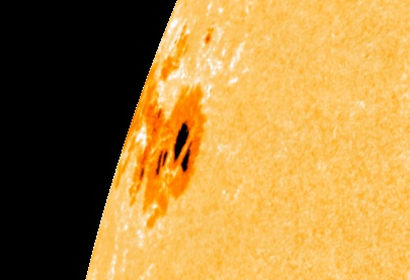 Sunspot group AR11339 peeks around the eastern edge of the Sun on 2 November 2011 in this image from NASA’s Solar Dynamics Observatory. Credit SDO/HMI

The first view of a truly big spot group arriving unexpectedly at the eastern limb is one of solar astronomy’s great rewards – and AR11339 is a very big group.

In this case the SDO’s “white light” image (2011 Nov 2, made in the EUV continuum) spoilt the surprise a bit because it showed a large penumbra maybe six degrees in latitude extent, but with only a sliver yet on the visible side, rounding the east limb. A big group loomed!

Clouds prevented a view on the third until a break in late afternoon – when the great sunspot group was hastily sketched. “Helio” timings showed the giant was 15º in longitude length (LL15) and was already 16º inside the limb (at the following end).

That sketch, at a scale of 12mm to each second of sidereal drift, gave the group an area of 1400 units – a truly large sunspot! 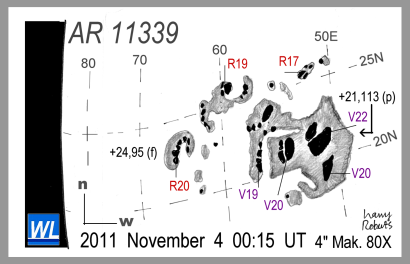 A sketch of the giant sunspot group AR11339 on the morning of 4 November 2011 (EDT). Image and copyright Harry Roberts ©, all rights reserved

The complex preceding (p) penumbra contained seven large umbrae, that in moments of good seeing resolved into many smaller spots: the (p) penumbra was roughly shaped like a map of Australia. This was followed (f) by several less regular “chains” of spots with curved penumbrae – like a chain of islands with lagoons. 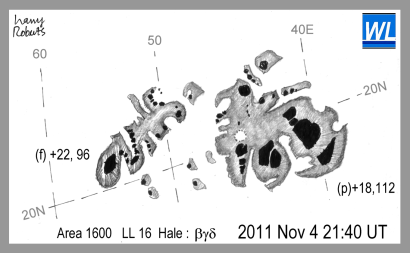 A sketch of the giant sunspot group AR11339 on the morning of 5 November 2011 (EDT). Image and copyright Harry Roberts ©, all rights reserved

Sketched again on the fifth (Fig3, Nov 4 21:00) it showed interesting growth, particularly in the easterly, i.e. following, component. The area was now 1600 units with longitude extent of 16 degrees (LL16), and it was upgraded by NOAA to Hale class Beta-Gamma-Delta, a strong predictor of flares – yet x-ray activity on the day was modest.

This new group is similar in size and shape to some that arose in years 2000/2001, leading to the peak of northern hemisphere activity for C23. Does this mean we are approaching the northern activity peak for C24? Wish I knew!

While everything about the new group suggested powerful activity the umbral fields recorded at Mt Wilson were modest, 2200G was the strongest on Nov 3rd – yet stronger fields may be seen as groups approach the solar central meridian (CM) when line-of-sight allows a clearer reading of field strength. We must await developments.

Zirin [Astrophysics of the Sun by Harold Zirin, Cambridge University Press, 1988] advises those who would see a flare to concentrate on delta class groups where new flux (i.e. new spots) are emerging; and remember his advice to use “persistence”!

And despite its modest fields, the group has (so far) hosted 6 or more GOES M class flares, and one X1.9 flare on November 3 at 20:30 UT. Brush the cobwebs off the H-alpha ‘scopes readers, and take a persistent look – things are “hotting up”!