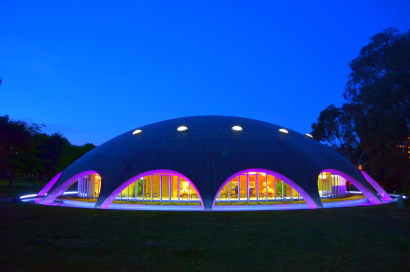 I and a number of other people were immediately concerned about this media release. Why?

Night-time lighting adds to light pollution of the night sky and so affects professional and amateur astronomers, as well as disturbing the nocturnal behaviour of insects, birds and other animals. It wastes energy and creates unnecessary greenhouse gases. Most important of all, recent research strongly indicates that night-time lighting has deleterious health effects on human beings through the disruption of the night-time production of the hormone melatonin.

According to an article in New Scientist by David C. Holzman (7 May 2011 pp45-47) ‘it is plausible that anything that suppresses melatonin could increase the risk of cancer.’ In addition, ‘disruption of our body clock and melatonin suppression have been linked to obesity, diabetes and cardiovascular disease.’ Studies have shown that the colour of the light is important with blue light having the greatest effect.

Obviously, cities cannot and should not be dark at night and some night-time illumination is necessary, safety and security lighting in particular. This lighting should be of high quality and follow the principles of good lighting: street lights should light up the ground so as to help drivers and pedestrians see what’s in front of them and not create glare shining into their eyes and thereby reduce contrast and visibility. Building decorative lights should be of the lowest level of intensity possible, should not shine upwards into the sky and should be of warm colours to minimise disruption to nearby residents.

The media release from the Academy seemed to imply bright lights shining into the sky with the deleterious effects mentioned above. What was particularly concerning was that the Academy is one of the leading voices in the promotion of science in Australia and its 400 plus fellows are the the leading scientists in the country. Such a body should not be setting out to cause harm to the environment.

In reply to my concerns the Academy’s Director, Communications and Outreach, assured me that the lighting is ‘modest and reasonably subdued’ and sent me the above photo of the lit–up Shine Dome. This photo has largely allayed my concerns. As far as can be judged from the photo, there are a number of good aspects to the lighting installation:

* The strip lighting of the arches is recessed and so does not light up the sky.
* The use of strip lighting directly next the areas to be illuminated minimises the light levels needed.
* Overall the lighting is ‘modest and reasonably subdued’.

At the same time, the moat surrounding the dome is lit up in a way that light does escape directly into the sky. What’s worse is that the predominant colour of the moat lighting is that most dangerous colour blue. Another problem is with the white-lit bubbles circling the top of the dome that are original and cannot be changed for heritage reasons. However, the opportunity could have been taken when changing their illuminating lamps to energy saving ones to introduce some kind of shielding and directionality so as to reduce the wasted light from them going into the sky.

Overall, the new night-time lighting of the Shine Dome is superior to the decorative lighting of many other buildings in Sydney, Melbourne and Canberra, but at the same time could and should have been even better.

One response to “Good lighting, bad lighting and the lighting of the Shine Dome of the Australian Academy of Science”