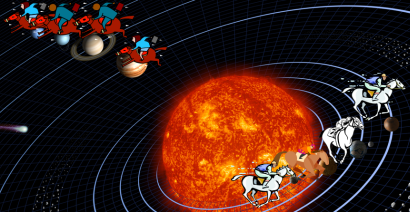 The planets are jockeying for position before the Kepler Cup on 1 November 2011. Image manipulation Nick Lomb. Original image Harman Smith and Laura Generosa NASA from Wikimedia

In 2011 as always, the race that stops a nation, the Melbourne Cup, is to be run on the first Tuesday in November, that is on the first of the month. A large field of horses will run around the track for approximately three minutes. To fit in with the race last year we ran the inaugural Kepler Cup among the eight planets of the solar system. The planet Mercury had a run-away win in this inaugural race.

After the race there were numerous protests from among the four billion jockeys on the third planet from the Sun that the race was unfair since Mercury had the inside track and so was bound to win by virtue of Kepler’s third law. This law relates the time taken by a planet to complete one circuit with its distance from the Sun.

AS a result of this cacophony of complaints the Kepler Cup stewards have introduced handicapping and made the race completely even and fair. Any planet can win under the new rules: the winning planet is the one that covers the greatest distance at its actual velocity in a set period in excess of the distance that it would cover at its average velocity. The race is to be run over a period of three minutes starting at 12 noon on Tuesday 1 November 2011. 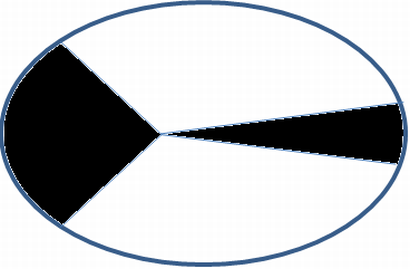 The speed of a planet varies as it circles the Sun in accord with Kepler’s second law. Drawing Nick Lomb

As discussed above, and in greater detail in connection with the 2010 Kepler Cup, the average velocity of each planet depends on its distance from the Sun and follows Kepler’s third law. However, due to their oval-shaped or elliptical paths around the Sun, the planets move at continuously varying speeds. These variable speeds are governed by Kepler’s second law, which states that the line drawn from a planet to the Sun sweeps out equal areas in equal times. The diagram above shows that to achieve this requirement, a planet moves faster when close to the Sun and slower when further from it. Kepler’s second law may seem arbitary, but it is just a reflection of a more general law, that of the conservation of angular momentum.

Who will win the 2011 Kepler Cup? The stewards will monitor the planets closely with all available instruments and remote-sensing devices during the three minutes of the race from 12 noon on Tuesday 1 November 2011. Unless there are protests or there is a photofinish, the results will be announced here on the Sydney Observatory blog on 1 November at 12:10 pm. In the meantime, place your bets! And to make it more interesting try the trifecta – first, second and third places.