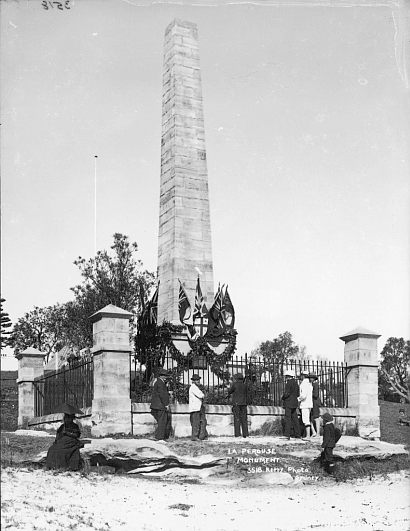 Captain Cook’s Monument at Kurnell in Sydney photographed by the Sydney firm of Charles Kerry & Co, probably between 1892 and 1917. The plaque on the monument states that Captain Cook’s landing at Botany Bay was on 28 April 1770. Is this correct? Image courtesy of Powerhouse Museum

Cook in 1770 sailed around the South Pacific, after having taken the observations of the Eclipse etc… So at some stage during those several years of sailing, he was technically on the eastern side of the IDL and at other times he was on the western side.

His log book does not seem to make adjustments for the changing back and forth across the IDL. He sailed from London, down around Sth America and then into the Pacific.

I am trying to find out WHEN the IDL was introduced to the NSW Calendar. I realise that in 1770, it was not yet drawn on maps etc. I believe it was ‘invented’ in the 1840’s.

I am trying to sort out in my own way …. if my relatives born and raised in NSW in the early part of the 19th C, ie when Gov Macquarie ruled (1810-1821) experienced any adjustment to their calendar during their lifetime…. Or if that happened during the life of their children or their grandchildren etc etc etc. … Or perhaps it was an adjustment made to the calendars of those on the EASTERN side of the IDL ….

Answer
As any Australians who have travelled to the United States would be aware, when crossing the International Date Line (IDL) flying east we gain a day and on the return journey flying west we lose a day. Officially the IDL came into existence after the conference in Washington DC in October 1884 that agreed on Greenwich in the UK as the zero longitude. As a consequence the IDL was 180° from Greenwich, across the Pacific Ocean. However, British seamen had been using charts based on Greenwich from the late 1700s and so for them there was no change in the location of the IDL after the Washington Conference.

Like other Royal Navy captains of his time, Cook did not take the IDL into account when recording dates, even when sailing west across the Pacific. An extra complication in interpreting dates in his log is that he was using nautical time that began at noon and was 12 hours ahead of the civil day. Thus in his journal he recorded his landing at Botany Bay on the afternoon of Sunday 29 April 1770. In civil time that was the afternoon of 28 April and that is the time inscribed on the Captain Cook monument at Kurnell. However, as Cook did not add the extra day on crossing the IDL it is now usual to correct his date to 29 April. These messy corrections are discussed in authoritative detail on the Canadian Archives & Collections Society website.

Fortunately, Captain Phillip’s First Fleet sailed eastwards to Australia without crossing the IDL and hence there was no ambiguity about the dates that he introduced to his infant Colony. In any case, the astronomer with the First Fleet, Lieutenant William Dawes, recorded the longitude of Sydney in the modern fashion of 10 hours 5 minutes and 24 seconds east of Greenwich, so that he was clearly aware that the Colony was on the west side of the IDL.

Any changes to the IDL by other countries, such as the Philippines that moved itself from the east side of the IDL to the west at the end of 1844, had no effect on the people of NSW. Neither do changes by Samoa that will occur at the end of 2011. Since the arrival of the First Fleet they knew which side of the Date Line they were on and had no need to make any shifts in the calendar dates.

Mary, you can rest easy, whatever hardships your ancestors experienced in New South Wales in the time of Governor Macquarie, having to lose a day due a shift in the location of the International Date Line was not one of them.

24 responses to “When did Captain Cook land in Australia? And did any changes in the International Date Line lead to a change in dates in Australia?”