The following email came in asking us to help identify a bright object in the night sky. It has a number of helpful observations and by Jove we love a challenge.

“Dear Sir/Madam, I recently sent an email to Kate **** from the CSIRO Astronomy regarding a bright round light that appears nearly each night from around 8pm and at this time is is low in the sky in the south east. As each hour passes it travels much higher in the sky towards the north east. On a clear night it is very bright white colour and does move reasonable quick. As nobody has been able to tell me what it is she suggested I contact you people and hopefully you can tell me what it is. We are watching this from our back yard in Burleigh Waters on the Gold Coast in Queensland. Thanking you in anticipation of your reply.
Regards Ray “

Let’s break it down and see what we can do?

“…nearly each night from around 8pm”. This tells us it was not a one off event. The “nearly” may simply be the result of cloud blocking the view.

“…low in the sky in the south east”. A cardinal direction with a time is perhaps the second most useful observation, after all the sky is pretty big.

“As each hour passes it travels much higher in the sky..”. This tells us the motion is in accordance with the daily rotation of the earth and probably not due to the object itself. This hint points well towards an astronomical suspect.

“…it is very bright white colour’. Brightness and colour in this case will probably seal the deal. Now let’s look at a simulation of the night sky at 9pm instead of 8pm. This will give the object time to clear the horizon.

We will use the free program Stellarium available from www.stellarium.org to look in the area from the east to southeast from 8pm to 9pm. 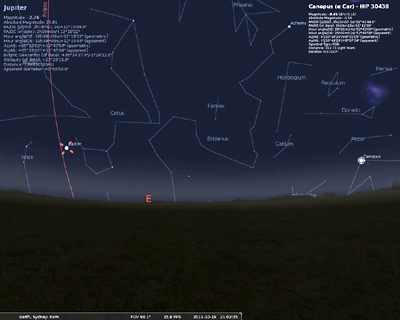 There are two bright white objects in the area described by Ray. To the south east lies the second brightest star in the night sky, Canopus and the planet Jupiter to the east north east. The information is too hard to read from the small picture here so two larger inserts have been included as well. A larger version of the main image will be available on our Facebook page. Looking at the relative brightness of the two candidates, Jupiter at present is nearly 6.5 times brighter than Canopus. 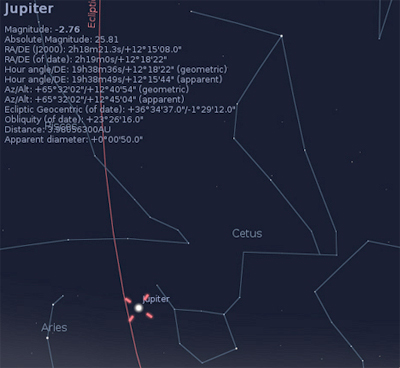 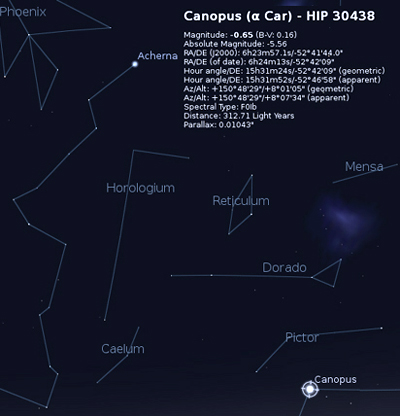 On the balance of probabilities, Ray has been seeing the King of the Gods, Jupiter. It is perhaps not unsurprising that Ray, and we are sure many others, have noticed Jupiter at present as it will be in opposition and at its brightest on Oct 29th.

An earlier blog by Dr Nick has more details on this. http://www.sydneyobservatory.com.au/2011/watching-the-galilean-moons-of-a-bright-jupiter-through-binoculars/

With Jupiter so close it is an excellent time to come along for one of our regular night tours. If the weather cooperates and the time is just right you should be able to see some nice detail on this spectacular planet.

One response to “What light through yonder window breaks?”