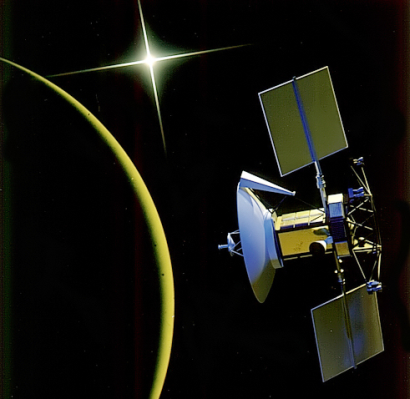 At present (October 2011) the planet Venus is shining brightly in the evening sky each evening after sunset. To the unaided eye it is just a bright point of light. Through a telescope we can make out that it shows phases like the Moon, a consequence of Venus being an inner planet. Little else can be seen even in large professional telescopes as the planet is permanently blanketed by a thick atmosphere mainly of carbon dioxide. Astronomers have managed to peer a little deeper with specialised equipment using infrared light, but that view is also limited. 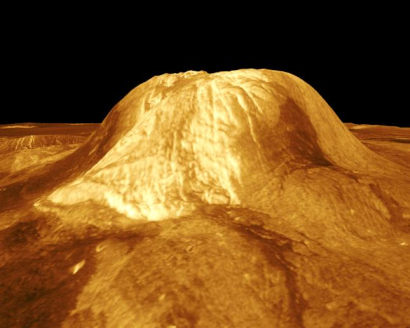 Our best views of the surface of Venus come from NASA’s Magellan spacecraft that sacrificed itself for science on this day (12 October) in 1994. When the spacecraft was no longer functioning properly scientists directed the spacecraft into an orbit low enough to hit the planet’s atmosphere. Contact was lost on 12 October 1994 at 8:02 pm AEST though the spacecraft may not have actually crashed into the atmosphere until the next day. 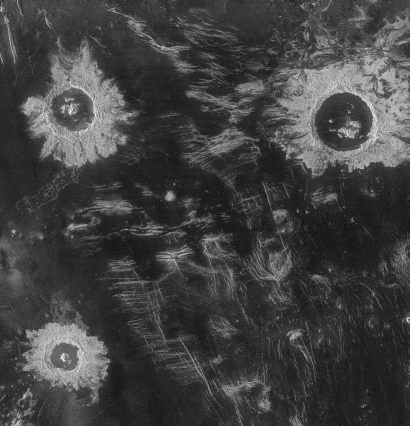 Three craters created by large meteors hitting the surface in the Lavinia region of Venus. The craters range from 37 to 50 km wide and are each surrounded by material ejected by the impacts. The ejected material is bright in the image so it must be rough material that reflects the radar waves well. Courtesy NASA/JPL

Magellan was launched from the Space Shuttle Atlantis in 1989 and reached Venus on 10 August 1990. The spacecraft was put together partially with spare parts from other planetary missions. For example, the high-gain antenna was a spare from the Voyager missions while much of the computer system came from the Galileo mission to Jupiter. To further cut costs and weight the high-gain antenna had a dual use: to communicate with Earth and to send and to receive radar signals from the planet’s surface. The radar was not pointed straight down, but at a slight angle. As well, the data was processed to be the equivalent of a much larger antenna in a technique called synthetic aperture radar. 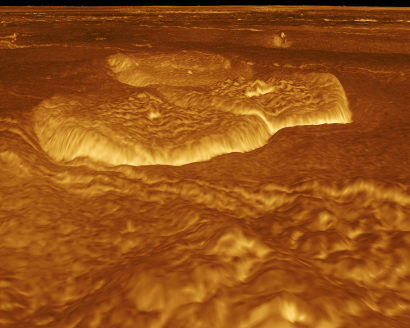 A three-dimensional perspective of part of the eastern edge of the Alpha Regio region of Venus. The domes visible are about about 25-km wide and up to 750-metres high. Scientists believe that the domes were created by lava erupting from below the surface. Courtesy NASA/JPL

The Magellan radar images indicate that the surface of Venus is young compared to that of say, Mercury, as relatively few craters are visible. This suggests that about 500 million years ago the planet was resurfaced by lava due to an unknown event. The planet still has volcanoes as hundreds of thousands or even millions of them are randomly scattered over the surface.

There are many more Magellan images of Venus in Transit of Venus: 1631 to the Present, publication date 1 November 2011.