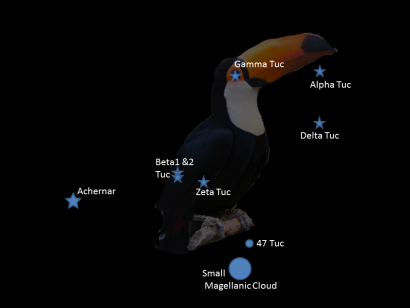 The constellation of Tucana the Toucan together with the neighbouring bright star Achernar. Drawing by Nick Lomb with Toucan image from Chris. P, Flickr.

The constellation of Tucana the Toucan is currently (October) high in the southern sky. The name of the constellation refers to a colourful South American bird distinguished by its huge beak. Though there are few bright stars in the constellation, it contains two of the most interesting objects in the sky, the globular cluster 47 Tucanae and the Small Magellanic Cloud.

The bright star Achernar is a near neighbour that is not part of the constellation. It belongs to the long and winding constellation Eridanus.

Let us first mention two stars. Alpha Tuc is a giant star over 30 times the width of the Sun that is at a distance of 199 light years from us. Its mass is only about three times that of the Sun and its surface is a little cooler. The star seems to be at a late stage in its lifecycle though according to Jim Kaler its exact evolutionary stage is unclear. A companion star circles the main star every 11½ years.

The star Beta Tuc may appear like a single star but even a small telescope shows it as double. There is more, however, as both of these stars are themselves double. As well, a little further away and visible to the unaided eye, there is another star Beta3 Tuc that is likely to be associated with the other four stars. Most of the them are hot young stars near the beginning of their stellar lives. If you manage to separate the two stars Beta1 and Beta2 with a telescope do not wait to see them move around one another as you would have a long wait – they take over 150 000 years to do so! If Beta3 does move around the other two, then it must take many millions of years so that would be an even longer wait.

We are fortunate that the two brightest globular clusters in the sky can be seen from the southern hemisphere. The brightest is Omega Centauri while the second is 47 Tucanae. This globular cluster is 13,000 light years from us and contains several million stars inside a relatively small volume of width around 120 light years. Not only does 47 Tuc contain visible stars, but it also holds X-ray binaries as well as the largest known collection of very short period pulsars (pulsating radio stars).

Most people involved in astronomy have been asked the question, ‘How far can you see at night?’. The answer for the unaided eye, from the southern hemisphere, is the Small Magellanic Cloud at a distance of about 210,000 light years. Together with its companion galaxy, the Large Magellanic Cloud, it circles the Milky Way galaxy and will probably merge with it in the distant future. Both Magellanic Clouds are easily visible to the naked eye on a dark night from a country site away from city lights, but sadly they are no longer visible from light-polluted cities like Sydney and Melbourne.