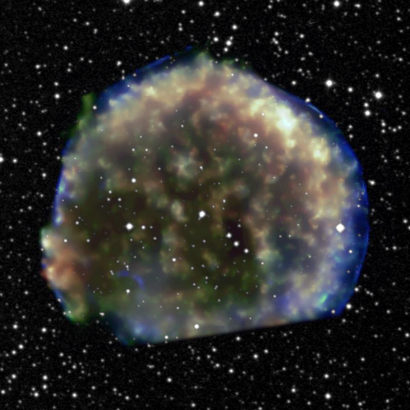 A Chandra X-ray telescope view of the hot bubble of gas left behind by Tycho’s supernova, SN1572. Danish astronomer Tycho Brahe first noticed this supernova as a bright ‘star’ in the constellation of Cassiopeia on 11 November 1572. Modern astronomers believe that the supernova was of type Ia, the type of supernovae that were used to establish the accelerating Universe. Courtesy NASA, CXO and P. Ruiz-Lapuente (University of Barcelona)

Yesterday 4 October 2011 it was announced that

The Royal Swedish Academy of Sciences has decided to award the Nobel Prize in Physics for 2011 with one half to
Saul Perlmutter The Supernova Cosmology Project
Lawrence Berkeley National Laboratory and University of California, Berkeley, CA, USA, and the other half to
Brian P. Schmidt The High-z Supernova Search Team
Australian National University, Weston Creek, Australia, and
Adam G. Riess The High-z Supernova Search Team

The Nobel Prize is the highest accolade and recognition for the work of any scientist and it is wonderful that an Australian scientist at the Australian Nation University’s Mt Stromlo Observatory is included in the 2011 Physics Prize. It is very fitting recognition for Professor Schmidt who was the leader of one of two teams that made possibly the greatest astronomical discovery in recent times. The discovery, released in 1998, that the Universe is not slowing down as had been expected, but is instead accelerating was completely unexpected and galvanised the astronomical community. 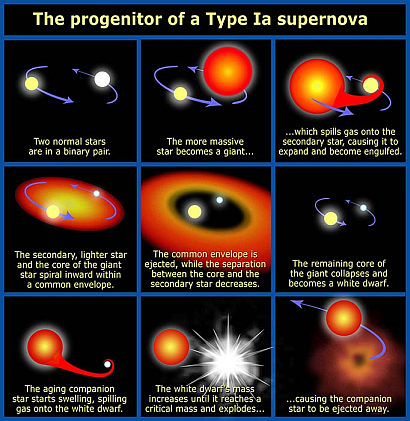 Illustration of a likely scenario for the formation of a supernova type Ia. Courtesy NASA, ESA and A. Feild (STScI)

The research was based on the observations of distant supernovae or exploding stars. The type of supernovae used were of type Ia that are believed to be white dwarf stars in systems with companion stars. In a system, as the companion star ages it bloats to a large size and starts transferring material from its atmosphere on to the white dwarf. When the white dwarf can no longer support the weight of the extra material, it explodes as a supernova.

The relevance for this project was that research in 1993 by Mark Phillips of the Cerro Tololo Inter-American Observatory in Chile had established that it was possible to estimate the intrinsic brightness of a supernova Ia explosion by examining how quickly its brightness fades. This result allowed type Ia supernovae to be used as ‘standard candles’ at large distances across the Universe. The two teams of supernova hunters, one led by Saul Perlmutter and the other by Brian Schmidt at Mount Stromlo, found that the supernovae of this type that they observed appeared fainter than the existing cosmological theories had predicted. The only conclusion that could be drawn was that the expansion of the Universe is speeding up and not slowing down as had been thought. The acceleration then makes the supernovae further away than expected.

The exciting challenge for astronomy today is to work out what is pushing the galaxies apart. There are lots of theories of what could be responsible for the ‘dark energy’ that permeates the Universe, but as yet there is no explanation. Maybe there are young children in Australia today who will in a few decades receive the Nobel Prize for the solution of this exciting mystery!

Once again congratulations to Brian Schmidt for well-deserved recognition.