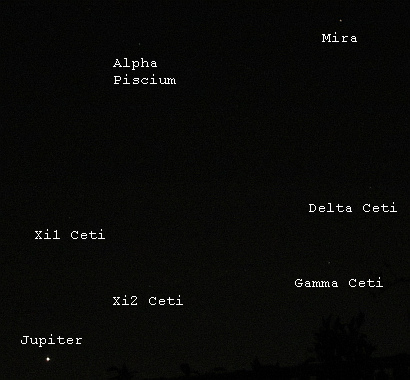 An annotated image showing Jupiter and part of the constellation of Cetus the Sea Monster on 3 October 2011 at about 10:30 pm. Four seconds exposure under poor conditions. The direction is slightly north of east. Image and copyright Nick Lomb ©, all rights reserved

The star Mira or Omicron Ceti, the best known intrinsically variable star in the sky, has been discussed previously on the Sydney Observatory blog. Currently, and for the next month or so, it can be easily seen with the unaided eye even from light-polluted cities like Sydney and Melbourne. Moreover, Jupiter is conveniently nearby and can be used as a signpost to help find the star.

The picture above was taken last night (3 October 2011) under poor conditions with the relevant part of the sky close to the horizon. Still it shows that Mira was easily the brightest star in its vicinity and indicates how to locate the star.

David Fabricius, an amateur astronomer, discovered Mira in 1596. He saw it gradually fade from view but did not realise that the star varied its brightness periodically. That was only noticed four decades later when a period of 11 months was established. Not long after the Polish astronomer Johannes Hevelius named the star Mira, the Wonderful. 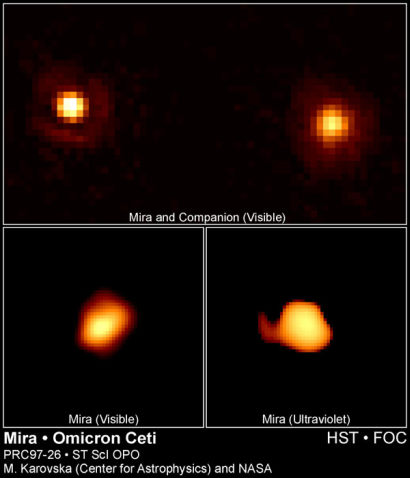 Hubble Space Telescope images reveal that Mira (on right in main picture) has a companion star, that it has an elongated shape and that the star has a gaseous extension towards its companion. Courtesy Margarita Karovska (Harvard-Smithsonian Center for Astrophysics) and NASA

Mira is a red giant star hundreds of times wider than our Sun and is near the end of its lifetime. It pulsates – becomes bigger and smaller – giving rise to its fluctuations in its brightness. Scientists estimate that at its minimum brightness it only shines as brightly as our Sun or even less while at its peak brightness it releases 700 or more times as much light as the Sun.

This is a good opportunity see this famous variable star and to do some naked eye astronomy. When will Mira fade to be to the same brightness as Gamma Ceti? From past light curves on the AAVSO website, I estimate that that will happen in mid November. Check it out!

Microcars
Discover the story of the rise Microcars through these striking examples of the tiny cars from pre- and post-WWII.
Exhibition