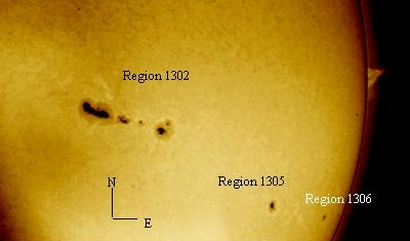 The giant sunspot AR1302 spreads over 180 000 km across the Sun while the prominence on the right hand edge of the disc reaches a height of 84 000 km. Picture taken through a 10-inch (25-cm) Meade telescope with a hydrogen alpha filter. Image and copyright Monty Leventhal OAM ©, all rights reserved

A large new sunspot became visible on the eastern edge of the Sun on 22 September 2011 and immediately announced its arrival with an X1.4 class solar flare. Flares are explosions on the Sun triggered by the release of magnetic energy. They are divided into three classes on the basis of the energy produced – X class are the most intense, followed by M class with C class the smallest. There are subdivisions within each class. The most intense flares can cause effects on Earth such as radio blackouts. 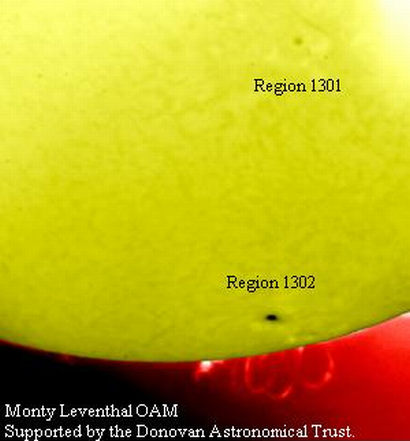 About 10 or 11 hours after the X1.4 class flare unleashed by sunspot AR 1302, the Sun showed these loop prominences on its edge. Picture taken on 22 September 2011 at 22:15 UT through a 10-inch (25-cm) Meade telescope with a hydrogen alpha filter. Image and copyright Monty Leventhal OAM ©, all rights reserved

There was also a coronal mass ejection (CME) associated with the first flare from the sunspot. CMEs are the ejection of particles, gases and magnetic fields from the Sun; they are often associated with flares. This CME did not hit the Earth. There was a second CME associated with a slightly stronger X1.9 flare two days later on 22 September 2011 and this one did cause a geomagnetic storm with aurorae (northern or southern lights) visible in the vicinity of both the north and south poles.

According to Spaceweather.com sunspot region AR1302 is bristling with magnetic fields – with a type classified as beta-gamma-delta, which basically means that it has a complex mixture of both north and south polarity fields. As a consequence further flares are possible. Wath this space for more pictures of the Sun’s activity from Monty.