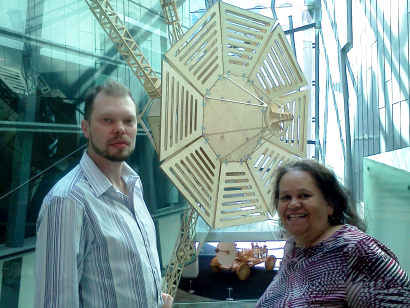 Duane Hamacher and Munya Andrews at the entrance of the Visions of Space exhibition at the Australian Centre for Moving Image (ACMI), Federation Square, Melbourne. Photo Nick Lomb

A new exhibition Star Voyager: Exploring Space on Screen opened at the Australian Centre for Moving Image (ACMI), Federation Square, Melbourne last Thursday 22 September 2011. I will report on the exhibition in a later post, but here I discuss the Visions of Space seminar that was held at ACMI to coincide with the first day of the exhibition. The first part of the seminar was on the astronomy of the Australian Aboriginal people.

There were two speakers at the seminar: Munya Andrews, a Melbourne barrister, who is originally from the Kimberley region of Western Australia, and Duane Hamacher, a PhD student who is researching Australian Cultural Astronomy at Macquarie University as well as being an astronomy educator at Sydney Observatory. In their presentations the two of them had very different approaches – one spiritual and the other strictly scientific – yet they were highly complementary and together gave a good introduction to the subject.

Munya Andrews made her most profound comment at the end of her presentation, but I mention it first as it underpins everything else she said. She explained that Aboriginal people do not see themselves as separate from the sky for they consider that what they see up there are their brothers and sisters. For instance, in the Kimberley region the local Aboriginal people believe that sky people came down to Earth to teach them and their ancestors.

In the Kimberley on the Mitchell Plateau there is a site with standing stones that represents the place where long ago the local tribes had a meeting to agree on common laws. According to a story Jebera the Emu man stole the food that had been prepared for the meeting to cater for his own greed. Afterwards he was tracked down and killed. This story is reflected in the movements of the Southern Cross which is upright in the early evening in some seasons and progressively lies down as the night progresses. This change in the aspect of the star group is pointed out by the elders as a lesson in the consequences of greed and the breaking of laws. 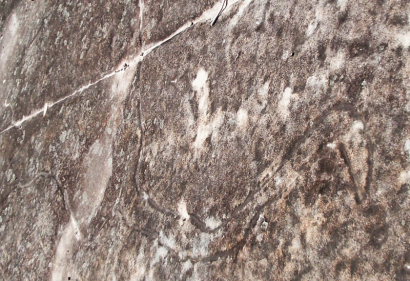 Duane in his presentation asked if the Aboriginal people were the first astronomers. Modern science explains phenomena through mathematics; could science be also done through oral tradition?

The carving of an emu in Ku-ring-gai Chase National Park matches the orientation of the famous Aboriginal constellation of the Emu made up of dark clouds in the Milky Way. The carved emu’s legs are folded just like the Emu in the sky and quite unlike those of emus observed on Earth. Even more intriguingly, the carving matches the sky just as emus are laying their eggs. To further support the argument that all this was intentional, Duane pointed out that, unnoticed by most people, there is an egg inside the carved emu.

Another example of deliberate astronomical alignments is Wurdi Youang, which is an egg–shaped ring of stones, located at a site between Melbourne and Geelong. The stones are about 50 metres across and their age is as yet unknown. What is interesting about the arrangement of stones is that they incorporate a number of astronomical orientations. One of the straight sides of the egg–shape points towards the midwinter sunset while the other points to the midsummer sunset and the centre line of the arrangement indicates the equinoxes.

After mentioning further scientific information encoded in stories and practices such as heliacal risings, eclipses of the Sun and Moon, and meteorite falls, Duane concluded that yes, the Aboriginal people were astronomers. He said that science is not restricted to Western style academia, but it is also practised by indigenous people. It is just the language in which the science is expressed is different.