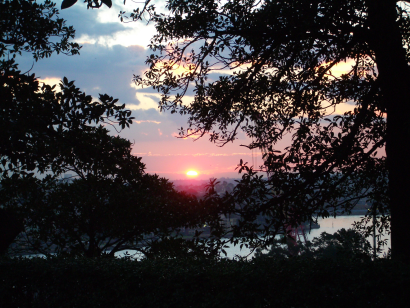 Question: I have a copy of the 2011 Australian Sky Guide and I travel a lot – to places such as Auckland, Christchurch, Melbourne, Adelaide and Perth. Can I still use the sky guide?

Answer: You certainly can use the sky guide in Australia and in New Zealand! That’s why the sky guide is changing its name from 2012 to the Australasian Sky Guide.

For cities in Australia and New Zealand the monthly star maps and the descriptions of the night sky and the locations of the planets remain the same. Corrections need to be applied to the listed daily Sun, Moon and planet rise and set times to compensate for the differences in longitude, time zones and the application of daylight saving, if any. For Australian cities these corrections are tabulated in the 2011 sky guide and from 2012 the corrections for NZ cities will also be listed.

After applying the corrections, there are still some remaining errors that vary throughout the year. These are due to the differences in latitude. For cities with latitudes close to the 33° 52′ latitude of Sydney, such as Auckland, Adelaide and Perth, the errors in estimating the times are only a few minutes. The errors in estimating the times are somewhat larger for cities noticeably south or north of Sydney. 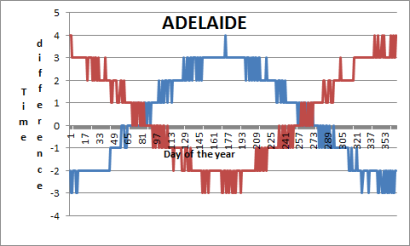 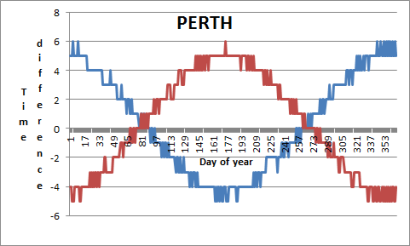 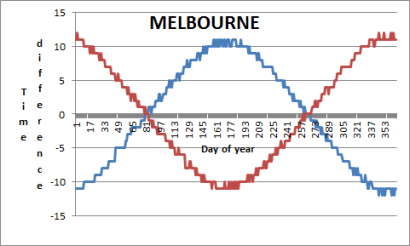 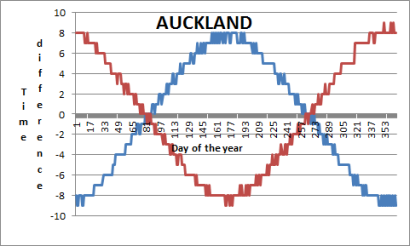 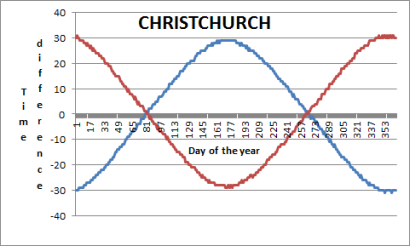 The above charts show for various cities the variation during the year of the residual errors in minutes in sunrise and set times after applying an average time correction from Sydney. Sunrise residuals are plotted in blue and sunset in red. Charts by Nick Lomb

As can be seen from the above charts the maximum residual errors in estimating sunrise and set times from times in Sydney are fairly small for Adelaide, Perth and Auckland. They are a little larger for Melbourne and up to 30 minutes in Christchurch. Maximum residuals occur in mid summer and mid winter and go to zero at the time of the autumn and spring equinoxes. This is because at mid summer and at mid winter the Sun is furthest from the celestial equator. Note that the curves for sunrise residuals and sunset residuals are complementary.

The residual errors for planets are similar to those for the Sun as they also follow the ecliptic and so deviate from the celestial equator by approximately the same maximum angles. However, the times when their residuals are maximum will vary from planet to planet and from year to year.

In summary, for most of the populous cities in Australia and New Zealand good estimates of Sun, Moon and planet rise and set times can be made easily on the basis of the times listed in the Australasian Sky Guide. And, of course, the star maps and sky descriptions are relevant as well.