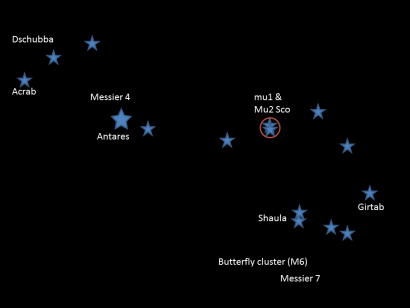 A drawing of the constellation Scorpius the Scorpion with the naked–eye double star mu1 & mu2 Scorpii indicated. Drawing Nick Lomb

Dr Terry Moon is an unusual astronomer. He has a PhD in astrophysics, but works as a research physicist in another branch of physics. In his spare time though he conducts astronomical research from his backyard in suburban Adelaide. As he told the Astronomical Society of Victoria (ASV) meeting on Wednesday 14 September, he has a relatively inexpensive lens telescope with an objective or front lens of 100 mm diameter, a photometer – a device to record the brightness of stars – lent to him by the Astronomical Society of South Australia and a shed with a roll–off roof. With this simple arrangement he can record the brightness changes of stars to a high degree of accuracy.

In his talk to the ASV Terry Moon described his observations and the subsequent analysis of the bright southern star mu1 Sco. This star is prominently located in the constellation of Scorpius and is part of a naked-eyed double with mu2 Sco. The two stars are not directly associated and so do not circle around each other, but according to Terry are distantly related as they were both created in the same cloud of dust and gas about 17 million years ago.

Although mu1 Sco looks like a single star through a telescope, astronomers have established that it’s made up of two stars that are close together and are physically associated. During the circuit each component makes around the other they regularly move in front of each other and block the light from their companion. These eclipses can be detected by astronomers as dips in the combined brightness of the two stars. There are two dips – a deep dip as the light from the brighter component is blocked and a smaller dip as the light from the fainter component is blocked.

Terry Moon obtained 133 new brightness measurements of the star between 2006 and 2008. These new measurements were combined with previous measurements, including 112 made by Dr Bob Shobbrook of Sydney University that were published in 2004. As well velocity measurements made by the International Ultraviolet Explorer (IUE) satellite were also used. From all this data the parameters of the double star could be deduced with the assistance of a software package called PHOEBE that fitted the data to theoretical models.

It needs to be noted that such observations of eclipsing binary stars are of great importance since they are the only way that astronomers can measure the masses and sizes of stars. As neither the mass nor the size of a single star can be measured, all our knowledge of the basic parameters of stars comes from the limited number of eclipsing double stars that have observed variations in both their brightness and their velocity.

Terry Moon’s research on mu1 Sco, carried out in conjunction with a theoretician from Flinders University in South Australia, was published in January 2010 in the prestigious astronomical journal the Monthly Notices of the Royal Astronomical Society and is a available as a preprint.

It is amazing what can be achieved from a backyard!