On a dark clear night who hasn’t looked up to see the last hint of meteor fading from sight? “Damn it why couldn’t I have seen all of it?” And then perhaps minutes, hours or nights later you do get to see one while everyone else is looking the wrong way! Looking for meteors or “shooting stars” can be very frustrating.

Every now and then however the probability of seeing some increases as the Earth silently glides through the dust trail left behind by a comet. This causes a meteor shower.

Next month is one of the better chances or is it? The Orionid meteor shower this year should start around October 2nd and go through to November 11th but the peak is from October 19th to the 22nd.

The Orionids are the result of dust left behind by that most famous of comets, Halley that last swept by in 1986 and will return in 2061. As the Earth rotates on its axis while orbiting the Sun the relative velocity of up to 70km/s makes short work of the dust hitting the atmosphere between 80 and 120km up. The result is a short sharp streak of light in most cases though sometimes a more spectacular fiery event can be seen lasting for several seconds.

So what can we expect this year? A lot depends on the observer’s location. In a bright city or dark country side, clouds, fog and latitude. The closer to the horizon the key point known as the Radiant is the poorer the view and the number of visible meteors drops.

For the Orionids the Zenithal Hourly Rate (ZHR) and therefore maximum under PERFECT conditions is above 23 meteors per hour. For major locations like Sydney this drops but be how much?

Where HR is the hourly rate for an observer, r is the population index, in this case 2, which describes the numbers of fainter meteors of each magnitude, LM is the observer’s average limiting magnitude ie how bright the sky is. For cities like Sydney this would be about 4.5 until the time of Moonrise when the sky becomes much brighter. A is the altitude of the shower’s radiant above the horizon in degrees which sadly for the 22nd will only be about 17 degrees above the ENE horizon. 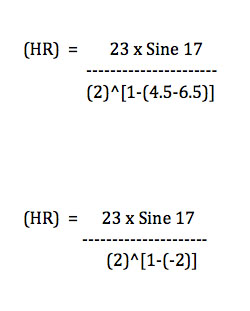 This means this years Orionids are effectively a non-event for us on the East coast of Australia in 2011 as the radiant is so low before the rising waning Moon. Maybe we will have better luck next year!

19 responses to “The Orionid meteor showing is coming or is it?”