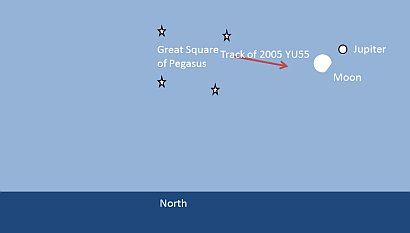 The position of asteroid 2005 YU55 at 9 pm AEST on 9 November 2011 as seen from Sydney with an indication of its track with respect to the stars and the Moon until dawn the next morning. Image and copyright Nick Lomb ©, all rights reserved

On the morning of Wednesday 9 November 2011 a 400-metre wide piece of space rock designated as 2005 YU55 will hurtle past the Earth at a distance that is 85 per cent of the distance of the Moon. Of course, that distance provides a sufficiently wide margin of safety that we do not need to have any concerns about our safety. Still it is of considerable interest as the only other pass we know about by an asteroid at a similar or closer distance will not occur until 2028.

As can be deduced from the designation of the asteroid, it was discovered in 2005. The discovery was made through the Spacewatch program near Tuscon, Arizona. The size of the object is known as it has been observed with radar with the Aricebo radio telescope on a previous approach. The radar showed that the asteroid was nearly spherical and spinning around its axis roughly every 20 hours. From its distance, brightness and size, scientists have found that 2005 YU55 is a very dark object that reflects only a small fraction of the sunlight falling on it. 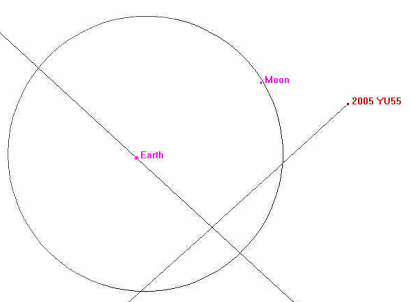 The position of asteroid 2005 YU55 with respect to the Earth and the Moon at approximately the time when it first becomes viewable from Australia. Movie frame 17 from a JPL/NASA animation of the close approach on 9 November 2011

Closest approach is at 10:28 am AEDT on 9 November 2011 when the distance of the asteroid is 85 per cent of the distance from the Earth to the Moon. Obviously, at that time it is daylight in Australia and it is not possible to see the object by visual means. In the vicinity of Sydney it becomes dark from about 8:30 pm AEST onwards and that is when it becomes possible to view the object.

Unfortunately, it will not be easy to find it in the sky. As it is such a dark body, its brightness is expected to be less than 11th magnitude or more than 100 times too faint to be seen with the unaided eye from a dark spot in the country. A reasonably large telescope and a good knowledge of the sky, including the RA and declination coordinate system, will be needed to find it. What makes seeing it even more difficult is that its path is near the gibbous Moon that will be brightening the sky that night.

Interesting radar observations can be expected from the near Earth passage of the asteroid. Seeing it through a telescope from Australia though will be challenging even for experienced amateur astonomers at good locations.

85 responses to “Asteroid 2005 YU55 to shoot by the Earth closer than the Moon on Wednesday 9 November 2011. Where and when can it be seen from Australia?”