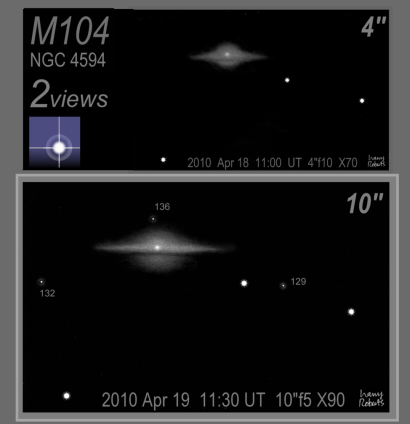 Sketches of M104 the Sombrero Galaxy through 4-inch (10-cm) and 10-inch (25-cm) telescopes. The galaxy is currently easy to find (May & June 2011) as it forms a roughly equilateral triangle with Saturn and Spica in the eastern sky. Image and copyright Harry Roberts ©, all rights reserved

Can we see galaxies with small ‘scopes in the suburbs? Many think a big ‘scope is needed to see galaxies at all– but small scopes in the ‘burbs can show quite a few galaxies. A big “Dobson” west of the mountains, however, will show hundreds!

We’ll exclude from this our companion galaxies, the Magellanic Clouds – they are excellent targets even for city-based binocular users – but good maps are hard to find.

If our target is a “real” galaxy – then it’s very far away. Most objects suited to small ‘scopes are “nearby” parts of our Milky Way Galaxy, like globular clusters, galactic clusters and nebulae of various kinds; they are thousands of light years away (Ly) – but galaxies are millions of Ly away.

One of the best galaxies for an urban ‘scope is Messier’s M104. This was not in his original catalogue but he noted it shortly after – and it was probably Pierre Mechain’s discovery – both saw it as a “very faint nebula” near star group Corvus, the Crow. For us M104 is high in our northern sky in autumn (and is actually in Virgo, at an altitude of ~60º). M104 is a compact object about a third the apparent width of the Moon (it’s not small).

M104, from my suburban yard, was surprisingly bright and detailed in the 4” F10 Maksutov (x70). Most conspicuous were the bright equatorial disc, the oval central halo (or bulge) and the starlike nucleus. This galaxy has a dark central dust-lane, the reason it’s called the “Sombrero” galaxy, which was hard to see in the 4”. Three tenth magnitude stars, flanking M104, made for an attractive view (sketch). A viewing with the ten-inch “Dobson” was planned for the next night – that, amazingly, was also cloudless.

The view in the ten-inch was much like that of the four-inch, despite six times more light. However, the dark lane was now clearly defined – seeming narrower where it crossed the central bulge, and distinctly curved. Human eyes can handle a wide brightness range – and the stellar nucleus now seemed to hover at the centre of the bright halo – where lurks a super-massive black hole. The bright ends of the galaxy disc seemed sharply pointed. Fainter field stars were now seen, and their magnitudes are added from Thompson and Bryan’s Supernova Charts; you never know – one might erupt when you next view M104!

One good reason to seek for galaxies in the suburbs is that when you visit a dark site you will know where to look – and then, be prepared for some stunning views!

Overall, M104 is a well-defined galaxy, that looks like its Hubble portrait – even in an urban ‘scope – despite being 30 million Ly away. No need for filters with this target – just ensure full dark adaption; use a head cloth and higher magnification to maintain it. M104 (NGC 4594) is a stunning galaxy, one that looks like a real galaxy! It’s not to be missed.

3 responses to “Harry succeeds in observing M104, the Sombrero or Mexican Hat Galaxy, through small telescopes in the suburbs”