Everyone hopefully saw the close alignment of the planets on Friday May 13th. The four, Mercury, Venus, Mars and Jupiter, won’t be so close again until Feb 2056 but they will continue to dance around each other for the rest of the month making a lovely early sight low in the east north east. There is however just one key date to lookout for, May 30th.

By the 30th Mercury will be lost in twilight’s glare but an old crescent Moon will join Venus, Jupiter and Mars for one last show so set the alarm.

Don’t worry if you miss it though, planetary groupings happen every few years but not as close as we have enjoyed this month for quite some time, in 2040 when Saturn joins the party, but they will be spread out over a bigger area. 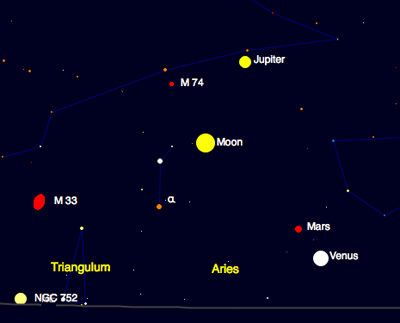 One response to “The Moon joins Venus, Mars and Jupiter” Family Day: Technology and Games
A free day of demonstrations, talks and hands-on activities focused on technology and gaming – designed to inspire people of all ages.
EventWorkshop