2pm to 3pm
Sunday 19 June
PLEASE NOTE – THIS IS AT THE POWERHOUSE MUSEUM
[500 Harris Street, Ultimo] 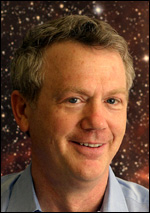 Public talk: Dark Energy and the Runaway Universe
To be presented by Professor Robert Kirshner*

Award-winning astronomer Robert Kirshner (Clowes Professor of Science at Harvard University) will give a public talk in Sydney on Dark Energy and how astronomers are working to determine its nature.

Observations of very distant exploding stars show that the expansion of the Universe is now speeding up, rather than slowing down due to gravity as expected. Other, completely independent data strongly support this amazing conclusion. Over the largest distances, our Universe seems to be dominated by a repulsive ‘dark energy’—an idea Albert Einstein had suggested in 1917 but renounced in 1929 as his ‘biggest blunder’.

Dark energy stretches the very fabric of space itself faster and faster with time. But the physical origin of dark energy is unknown, and is often considered to be the most important unsolved problem in physics.

About the speaker
Robert Kirshner is one of the world’s foremost researchers on supernovae — exploding stars. As a member of the High-z Supernova Search Team in the 1990s he and his colleagues, along with a rival team, revolutionised cosmology by discovering that the expansion of the Universe is accelerating. Determining the nature of the ‘Dark Energy’ that drives this acceleration is now a central problem in physics and cosmology. Kirshner has received many honours and awards: most recently, he was a co-recipient of the 2007 Gruber Prize in Cosmology.

He is visiting Australia to take part in an international conference, Supernovae and Their Host Galaxies.

* Please note: this talk was to have been given by Professor Alex Filippenko, who has had to cancel his visit to Australia at short notice.