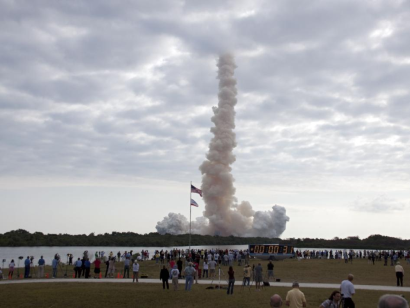 The launch of Space Shuttle Endeavour on its final mission into space. Courtesy NASA/Troy Cryder

Space Shuttle Endeavour, named after the ship in which Captain Cook sailed to Tahiti in 1769 and on his return voyage to England mapped the east coast of Australia, blasted into space for the last time yesterday evening (16 May 2011) Australian time. It is on a mission to dock with the International Space Station and to deliver and install an important cosmic ray experiment, the Alpha Magnetic Spectrometer (AMS–02). After its return and retirement, Endeavour will be put on display at the California Science Center in Los Angeles.

There are a few good opportunities to see Endeavour as it is docked to the International Space Station from Sydney early in the mission (for other places see Heavens-Above). The first of these is on the evening of Thursday 19 May 2011. The ISS will be seen as a bright light low in the north-west sky from 6:33 pm until it enters the shadow of the Earth at 6:37 pm. It will then quickly fade out , just before it reaches the star Regulus in the constellation of Leo. 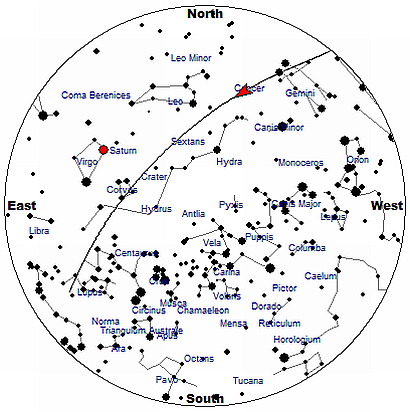 Star map showing the path of the ISS over Sydney in the evening twilight of Saturday 21 May 2011. Courtesy Heavens-Above

There will be an excellent pass during evening twilight on Saturday 21 May 2011. The pass begins at 5:45 pm low in the north-west, proceeds very high up, passes through the constellation of Corvus the Crow and then fades out at 5:52 pm just before reaching the constellation of Scorpius the Scorpion. Weather permitting, that will be the time to wave to the ISS, the Shuttle and its astronauts. 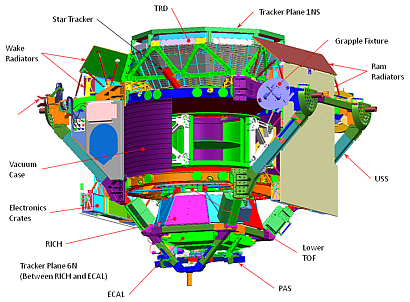 A schematic diagram of the Alpha Magnetic Spectrometer. Courtesy the AMS collaboration

AMR–02 is probably the most important scientific instrument to be flown on the International Space Station. Based on a giant magnet with a magnetic field 4000 times stronger than that of Earth, it is designed to detect and analyse cosmic rays in space. Results could include information on the existence and amount of antimatter in the Universe. This is of great interest to scientists as equal amounts of matter and antimatter should have formed in the Big Bang and yet, so far, there has been no signs of antimatter. As well, AMR–02 could obtain indications of the nature of the dark matter that we know permeates the Universe, but the nature of which is unknown.