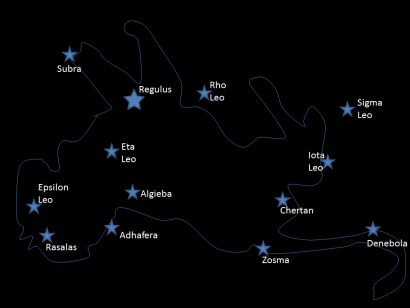 The main stars of Leo the Lion as seen from Australia looking east at about 6 pm AEST in mid May. Image and copyright Nick Lomb ©, all rights reserved – using Stellarium software

The constellation of Leo the Lion is one of the constellations of the zodiac, meaning that the Sun, the Moon and the planets can pass in front of it during the year. It is usually identified with the Greek legend of the Nemean Lion, a frightening monster that could survive attack with a sword or with arrows thanks to its impenetrable fur. The hero Hercules in the first of his 12 labours managed to overpower the creature using his great strength.

From Australia the creature is upside down in the sky and hence does not appear especially frightening. In fact, with its legs in in the air it looks as it wants its belly rubbed like a cat. Be careful though, it may be one of the many tricks of the Nemean Lion!

The brightest star of Leo is Regulus, the little king. According to Allen (RH Allen, Star Names: their Lore and Meaning) the diminutive form of the name was given to the star by Nicolas Copernicus. The star has had royal affiliations since ancient times and the Persians regarded the star as the leader of the Four Guardians of Heaven, which also included Fomalhaut, Aldebaran and Antares.

As the line of the ecliptic almost passes through Regulus, the star is often occulted or covered by the Moon.

The star is a fast spinner, spinning on its axis once every 16 hours. This fast speed distorts the star into a sort of pancake-shape with the width at the equator one third larger than the width at the poles. Interestingly, one result of this distorted shape is that the star is much hotter at its poles than at its equator: 15 000°C at the poles and 10 000°C at the equator.

Regulus has three companion stars. It is circled by a pair of stars that circle each other every 900 years or so, but together take over 100 000 years to move around Regulus. As well there is a much closer star that maybe a white dwarf and circles Regulus in only 40 days.

The second brightest star in Leo is Denebola in the tail of the Lion. The name comes from an Arabic phrase meaning, unsurprisingly, the Lion’s Tail. It is at a distance of 36 light years and has a temperature of about 8000°C. An unusual feature of the star is that it is surrounded by a dust cloud, possibly left over from its formation.

If you want to look for Leo and its stars, May is a good month to do so with the constellation due north and at its highest in the early evening.