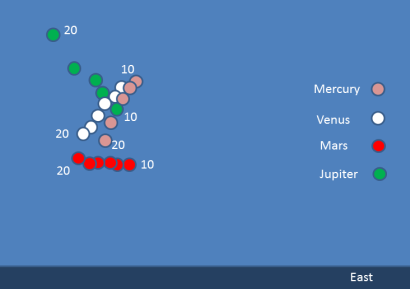 The positions of four naked eye planets, Mercury, Venus, Mars and Jupiter as they jostle for position in the eastern sky at 5:40 am before dawn each morning from 10 to 20 May 2011. Drawing Nick Lomb using Stellarium

During May 2011 it is worth rising early despite the chilly mornings to view the dance of the planets in the eastern sky. Over this month the planets Mercury, Venus, Mars and Jupiter take up a variety of interesting patterns that change from morning to morning. As the planets are fairly bright, city lights and other forms of light pollution for once hardly matter. Some highlights:

Friday 13 May – Jupiter, Venus and Mercury form a triangle with Mars below. Sydney Observatory is holding a special early morning viewing

Saturday 21 May – Mars, Venus and Mercury form a triangle with Jupiter above

Tuesday 31 May – Jupiter, Mars, Venus and Mercury are in one line with a thin crescent Moon forming a triangle with Mars and Venus

If Saturn was with the four planets then all five naked eye planets would be near each other and we would have an even rarer spectacle. However, Saturn is holding the fort as the only evening planetary representative and so it is out of the picture. 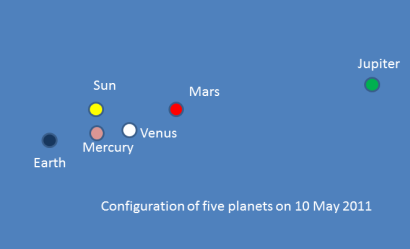 The position of the four planets plus the Sun and the Earth as seen from above the plane of the solar system on 10 May 2011. Drawing Nick Lomb using the JPL Small-Bodies Database Browser

Why do we get these interesting patterns in the sky? As the planets circle the Sun, each with its individual period or year, they sometimes are in a position that, seen from Earth, leads to such patterns. As indicated in the drawing above on 10 May 2011, as seen from Earth, Mercury, Venus, Mars and Jupiter are almost in the one line. Hence they appear close together in the sky. 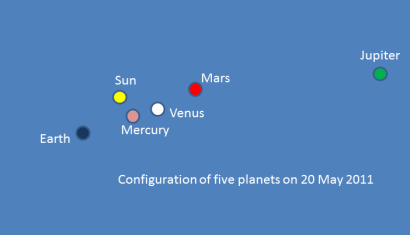 The position of the four planets plus the Sun and the Earth as seen from above the plane of the solar system on 20 May 2011. Drawing Nick Lomb using the JPL Small-Bodies Database Browser

The drawing above shows the positions of the planets 10 days later on 20 May. As can be seen the four planets closest to the Sun have moved appreciably in their orbits or paths around the Sun. Jupiter has hardly moved in the interval and so it is the odd one out and the one that appears furthest from the other three.

For those with a digital camera all this action in the morning sky provides a perfect opportunity for some celestial photography. For a preview of what can be achieved have a look at the great image on the Observatory’s Facebook page taken on 8 May 2011. Time exposures are necessary so rest the camera on something solid, or preferably use a tripod, before pointing it at the sky. Of course, use a suitable zoom setting so that the four planets are captured in the image.

26 responses to “Watch the early morning planetary dance of May 2011 as four naked eye planets – Mercury, Venus, Mars and Jupiter – jostle for position in the eastern sky”