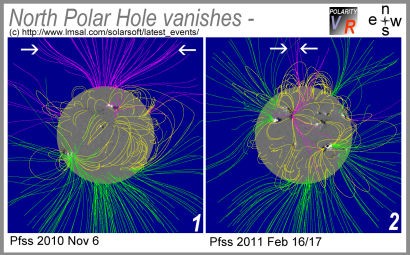 The magnetic field simulations are shown for 2010 November 6th and for 2011 February 16. Open field is marked pink or green while closed field connecting opposite polarities is yellow. Harry Roberts and the Lockheed Martin Solar and Astrophysics Laboratory

While the sun doesn’t look magnetic in a small telescope, our star is a wholly magnetic body – and despite it’s huge size, one that can change quickly.

Early in the 20C Hale and others discovered the sun’s magnetic character. Experiments had shown how spectral lines in strong magnetic fields formed double images of themselves – and when spectrographs of sunspots were viewed (1912, atop Mt Wilson), there were the telltale doublets. The sunspots were formed by strong magnetic fields – and the displacement of the line gave the field strength in the spot, typically around 3000G. (Current fields in spots are much weaker).

Although strong fields in spots could then be measured, it was not until 1953 that Harold Babcock developed the magnetograph, “a photoelectric device to measure the weaker (surface) fields” (Zirin, H “Astrophysics of the Sun” Cambridge Uni Press. 1986. P 29.). These instruments recorded magnetic fields over the whole (visible) solar disc– and magnetograms are now posted online daily.

Recently, 3D modelling of solar coronal fields has become reality – the so-called “hairy sun” models– and these too are now posted online. The original work was by Newkirk and Altschuler (1970) who “compared the eclipse corona with the potential field distribution obtained by using the photospheric magnetic fields as a source”

Polar Field Reversal: Hale discovered the reversal of the sun’s magnetic poles that occurs at successive solar maxima. This last happened in 2001 – when “hairy sun” models were not widely available – but they are available now: What do they show?

The Figure compares the potential field simulation for 2010 November 6th with that for 2011 February 16 Open field is pink or green – and closed field connecting opposite polarities is yellow.

What a contrast the models reveal. Fig 1 shows widespread open S polarity (green) over much of the southern hemisphere, while a strong clump of open N polarity (pink) is sited at the sun’s north pole. This means that a large coronal hole lay at the suns north pole 3 months ago (White arrows Fig 1).

North Pole Vanishes: Fig 2, by contrast, shows that the open S field (green) dominates both hemispheres of the sun by 2011 February. And when the green field reached the high north latitudes it connected (or closed) with the north polar hole. In just three months the sun’s north polar hole has almost gone (white arrows Fig 2)!

We know that at solar minimum coronal holes of opposite sign develop at the sun’s poles – while elsewhere on the disc closed fields dominate. As maximum approaches new sunspots form with reversed polarity (compared to the old cycle), and these spots leave a (comet-like) tail of polarity that drifts pole-wards. When this polarity reaches the high latitudes it will “close” with the open polar field –eliminating the polar coronal hole that formed there during the previous minimum.

This strange event seems to have already happened at the sun’s north pole – despite the “rule” that the change occurs at solar maximum – and may show that the northern hemisphere “thinks” it is closer to solar maximum than the southern hemisphere that is still covered in old south polarity, including a strong south polar hole. The loss of the southern hole seems unlikely any time soon.

During old SC23 activity in the two hemispheres was out of “synch” by two years – and this still seems to be the case. How will the two hemispheres deal with the time conflict? We must wait and see. Keep a close watch on the Solarsoft “hairy sun” models – there’s a big experiment in solar physics going on in the daytime sky, right overhead .

2 responses to “Harry reports on the latest exciting development on the Sun: the disappearance of the magnetic hole at its north pole!”