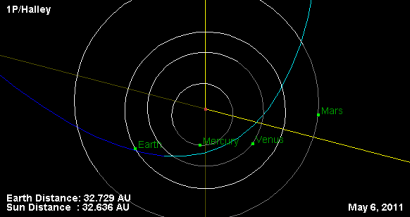 The position of Earth and the path of Halley’s Comet on 6 May 2011. Image courtesy JPL

Each year in early May the Earth runs into a stream of dust left behind by Halley’s Comet. The comet itself is far away, almost at the furthest point of its long, elongated, oval-shaped path round the Sun. As the Earth moves into the stream small dust particles hit the Earth’s atmosphere at the fast speed of 66 km per second and burn up 100 km or so above our heads. This year there is a favourable opportunity to see the meteor shower as the Moon is only a few days past new and hence will not be brightening the sky.

Halley’s Comet approaches the Sun every 76 years. Each time it does so it loses some of icy surface and with it a considerable amount of dusty particles. At the time of a close approach such as in 1986, we see the ejected dust particles as the tail of the comet. Over the aeons that the comet has been circling the Sun these ejected particles have spread around its path around the Sun. We meet this dust stream each year in May when it gives rise to the Eta Aquarid Meteor Shower and in October when the corresponding meteor shower is the Orionids.

Note that astronomers name meteor showers after a star near to the radiant, the spot in the sky from which the meteors appear to emanate. 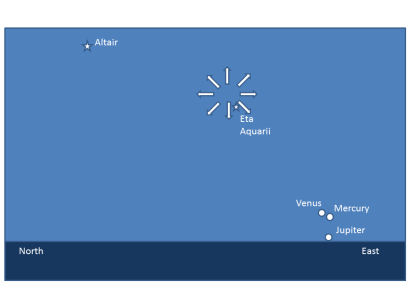 The Eta Aquarid meteors appear to come from a spot near the faint star Eta Aquarii. Drawing for 5 am AEST on 6 May 2011 as seen from Sydney. Drawing Nick Lomb

The best time to view the meteors is in the early morning before dawn. The above diagram is for 5 am AEST on 6 May 2011, the day when the shower is expected to be at its peak. As the dust particles hit the atmosphere they burn up and we see a streak of light in the sky. These are called meteors.

It is important to find a dark spot from which to view the meteors as they are fairly faint and would not be visible against a bright sky. For those in Sydney, with its bright lights, a viewing spot looking out over the ocean maybe the best available locally.

From a dark spot an Eta Aquarid meteor can be expected every two or three minutes. Note that they could be anywhere in the sky, but if they are traced back they all originate from the one spot in the sky, the radiant. This is an effect of perspective. The meteors are moving parallel to each other, but their tracks all appear to converge to the one spot just like rail tracks appear to recede into the distance. 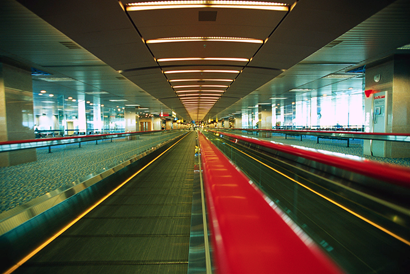 If you are willing to rise early, then have a go at catching sight of a few bits of Halley’s Comet!

6 responses to “Want to see bits of dust left behind by Halley’s Comet burning up in the Earth’s atmosphere? Watch out for the Eta Aquarid Meteor Shower on the early morning of Friday 6 May 2011”