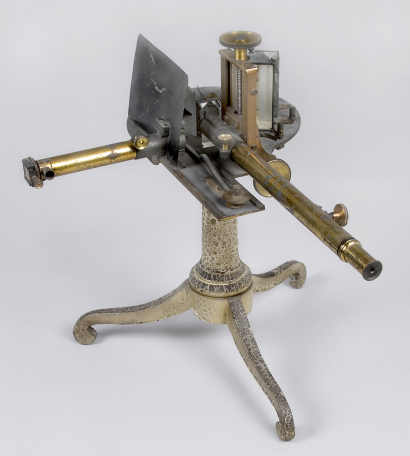 Government Astronomer Henry Chamberlain Russell purchased this spectroscope for Sydney Observatory while in London in 1875. It was made by the then new firm set up by instrument maker Adam Hilger. Powerhouse Museum collection H9974

In a recent post on the Powerhouse Museum’s collection blog my colleague Debbie Rudder explains how chemists could discover new elements by examining the spectrum they emitted when heated. Each substance emits its own characteristic ‘barcode’ of lines at different colours or wavelengths. These can be studied by a device called a spectroscope that uses prisms (or gratings) to spread light into its constituent colours.

Astronomers quickly seized on this new technique to examine distant stars and nebulae as it provided for the first time a way of discovering the constituents of these unreachable objects. Strangely, it was not the major professional observatories such as the Royal Greenwich Observatory that took the lead, but wealthy amateur astronomers. Among the most prominent of these was William Huggins, later Sir William, who had a private observatory at Tulse Hill in Lambeth, South London.

Huggins published his first paper on spectral lines in 1863 and by the next year made the important discovery that some nebulae were made up only of gas and did not contain any stars. Soon he was measuring the velocities of stars using the Doppler Effect, the slight shift in the wavelengths of spectral lines due to velocity. He also experimented with photography to record the spectra that he was observing.

NSW Government Astronomer Henry Chamberlain Russell was clearly aware of developments in this new field of spectroscopy for while in England in 1875 he purchased a spectroscope. The spectroscope shown above was made by the then newly set up firm of Adam Hilger. Russell used the spectroscope on at least one occasion when he took it together with one of the large telescopes from the Observatory up to the Blue Mountains. However, following the lead of Greenwich, Russell kept on with routine astronomical tasks and did not take up the challenge and opportunity offered by the spectroscope. 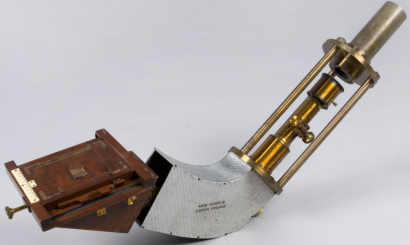 The Hilger spectrograph purchased by Sydney Observatory in about 1915. Powerhouse Museum H9955

In the early 1900s Sydney Observatory purchased another spectroscope from the same firm. This spectroscope, H9955 in the Powerhouse Museum collection, was made in 1913 or soon afterwards and shows considerable advances in design in that it is clearly designed to be connected to a telescope and in that it is designed not just to allow visual views, but also to record spectra photographically. Hence, technically it should be called a spectrograph and not a spectroscope. A cross-sectional blueprint that came with the instrument shows that it contains two prisms to spread the light coming from the telescope. As shown by the picture below, Sydney Observatory astronomers did use the spectrograph on appropriate occasions. 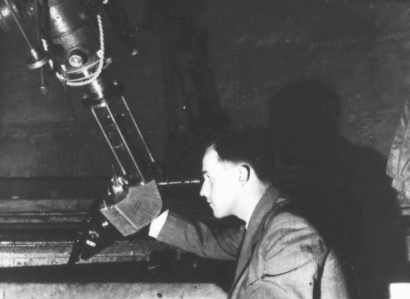 Government Astronomer Harley Wood using the later Hilger spectrograph, probably in the early 1940s, on the 29-cm telescope in the Observatory’s south dome. The eyepiece he is using allowed him to examine light reflected off the face off the first prism and hence to check if the star, comet or other object is properly positioned to shine light into the spectrograph. Picture Powerhouse Museum

In Australia spectroscopy and astrophysics only began to be seriously pursued with the establishment of Mount Stromlo Observatory, near Canberra, in the mid-1920s. The Powerhouse Museum has a number of important spectrographs from Mount Stromlo Observatory, but that is another story or another blog post. Here we just note that to today’s astronomers have a variety of techniques at their disposal, but spectroscopy is by far the most important.

Russell’s 1875 Hilger spectroscope is most likely the earliest spectroscope purchased for astronomy in the country and as such it is of crucial importance and of great significance in the history of Australian astronomy.

11 responses to “How do we know what stars and other celestial objects are made of? Astronomy, spectroscopy and Sydney Observatory”