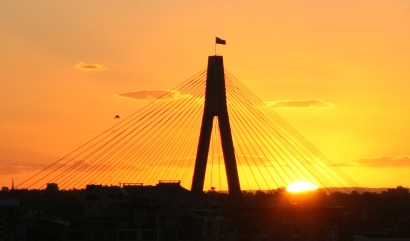 The simple definition of Easter Day is:

The Sunday following the full Moon which happens upon or next after the March equinox.

Autumn equinox in 2011 was on 21 March (Australian time zones) and the next full Moon was on Monday 18 April. So it is not surprising that Easter Sunday is 24 April 2011. That incidentally is almost as late in the year that Easter can fall as the last possible day is 25 April.

In fact, the simple definition is incorrect. Instead of “full Moon” we need to substitute “the fourteenth day of the calendar moon” and instead of “March equinox” we need to insert “21 March”. That means that Easter is based on a calculated “calendar moon” instead of the real Moon. It is based on a calendar moon because in the past the complex calculations to establish the path of the Moon in the sky could not be easily done and certainly not extended into the future as was required. Hence it was easier to base the calculations on tables that allowed the calculation of the calendar moon a long way into the future and this calendar moon is a good approximation to the movement and phases of the real Moon.

As well, the calculation was simplified by fixing the date of the equinox on 21 March.

It is thus possible for the occurrence of Easter not to match the dates given by the simple formula outlined at the top of this post. Fortunately, such occurrences are rare and not this year for otherwise the phones at Sydney Observatory would be running hot with inquiries and complaints!

One response to “Why is it Easter this weekend (updated)?”