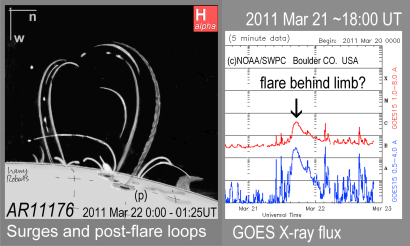 “Elegant features of most large flares. It is not known if they occur in small flares because of visibility problems”.

Zirin’s words always seem apt when these unusual prominences appear; like incandescent wires against the blackness of space. The writer has seen several fine examples, but not yet a photo that captures their delicate forms.

Post flare loops appear in the high temperature “bubble” blown in the corona above a large solar flare. Magnetic arches above the flare site cause material to condense into them, making the arches briefly visible as it drains down into the spots below. This is the only time the normally invisible magnetic arches can be seen in H-alpha.

Loop prominences do occur above spots on the disc (after big flares), but the loops are dark against the chromosphere, and hard to detect. To witness the full spectacle the flare must erupt near the sun’s limb – as when AR11176 rounded the east limb on 2011 March 22.

The GOES satellite detected a modest C4 flare behind the east limb six hours earlier, before local sunrise (Mar 21 18:00UT). When rain ceased a few thin bright, very tall loops were logged. From time to time thin crescents or single droplets of bright material were also seen, most slowly falling towards the disc. The Figure combines several features over an 80-minute period. Presumably a much bigger flare behind the limb caused the loops– with the earth-orbiting satellite “seeing” only a minor x-ray flux from the hidden flare.

Individual loops were linked to distinct points on the disc – the more northerly ones to the preceding (p) and following (f) spots of the slowly emerging group – but southerly loops connected to unknown points apparently behind the limb. Timings showed the tallest loops were 140Mm in height – very high loops.

Surges in sunspot AR11176 at the eastern edge of the Sun on 22 March 2011. Image and copyright Harry Roberts ©, all rights reserved

Surges: as well as the loops, another interesting feature was the regular eruption of many bright surges. In the figure the lower loop-shapes, mostly only 40Mm high, are probably surges – and came and went regularly.

One bright surge erupted near the (p) spot and rose to 90Mm in 11 minutes, a velocity of 130 km/s, typical for surges. Its recoil was only partly observed (more cloud). Also the bright “blister” near the (f) spot, close to the limb at 01:25 UT, was I believe another surge in early stages of eruption. Overall, the combination of loops and surges made for an amazing spectacle.

Another session two hours later showed the site still active, with yet more tall loops and bright surges, though only GOES C-class flares were logged.

Over following days the spot group came into full view, revealing a “round-ish” (p) spot with a larger sausage-shaped spot following – an unusual configuration. No detailed polarity was available for the group from Mt Wilson due to cloud and snow there. 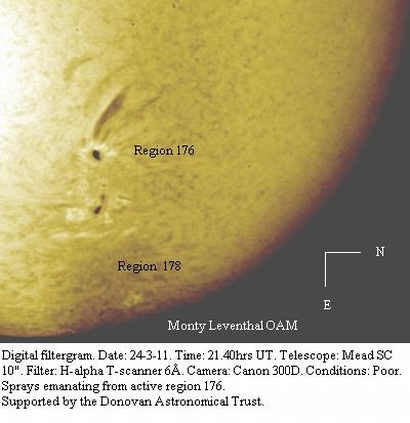 On March 24th AR11176’s preceding spot produced more large surges, by this stage seen as dark against the bright chromosphere. When polarity data became available the group was seen to be almost entirely red polarity, with just two tiny violet spots that soon faded, leaving an all red group stretching across 14 degrees of solar longitude – a most uncommon kind of sunspot group.