The view from the time gun on Fort Denison in Sydney Harbour is towards the Opera House. A magnificent view, but it is no longer possible to see Sydney Observatory and its time ball as they are hidden by the building. Image and copyright Nick Lomb ©, all rights reserved

Over the last week there has been a fun discussion in the Sydney Morning Herald’s Column 8 about the one o’clock gun at Fort Denison and the time ball at Sydney Observatory. The discussion began with John Kimpton, of Cremorne Point asking, presumably sarcastically, ‘Am I the only person who enjoys hearing the 1pm Fort Denison gun fire at exactly 12.59pm each day?’. My Sydney Observatory colleague Allan Kreuiter then joined in reassuring readers that the Observatory’s time ball does drop at the correct time one 1 pm and not a minute early. Noting this Column 8 asked ‘Is the gunner at Fort Denison, er, taking his eyes off the ball, perhaps?’

There was a reply in Monday’s (11 April 2011) Column 8 from Bindi Bow, who is an employee at Fort Denison and as part of her duties fires the gun at 1 pm on weekdays. She explains that in the past the gun was fired when the time ball on the Observatory was seen to drop, but that is no longer possible due to the Opera House blocking the view of the ball.

Ms Bow says that she uses the speaking clock available by telephone on 1194 to obtain the time and fires the gun accordingly. Assuming that the provided time is correct (1194 is operated by a private company with reference to UTC (AUS)), what time should the time gun be heard by John Kimpton at Cremorne Point or by anyone else close enough to hear the sound? 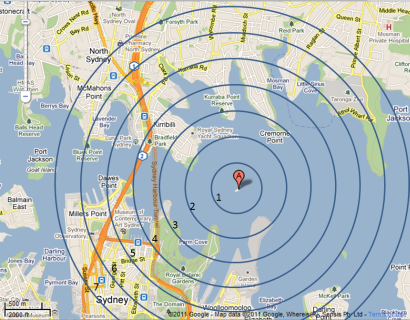 A map indicating the times for sound to travel to different places near Fort Denison and Sydney Harbour. Each concentric circle denotes an extra second of travel time. Drawing Nick Lomb on a Google map of Sydney Harbour

A visual time signal such as from the time ball can be regarded as instantaneous due to the high velocity of light. A sound signal as from a time gun is not, as sound travels much more slowly. In dry air at 20°C temperature it travels at 343 metres per second. Using that figure I prepared the map above showing how long after the firing of the gun it would be heard. Such maps have been prepared for other time guns such as the 1861 map for the gun at Edinburgh. The map indicates that at Cremorne Point the gun should be heard at 1:00 pm and 3 seconds. Note that this does not take into account Ms Bow’s reaction time, any time delays in the gun itself and propagation differences due to temperature changes and wind.

Do you live in the vicinity of Sydney Harbour, can hear the gun fired as well as see the time ball drop at 1 pm? It would be good if you could time the delay from the ball drop to the time you hear the gun and let us know. The above map could then be verified experimentally.

9 responses to “What time should you hear the time gun fired at 1 pm each day from Fort Denison in Sydney Harbour?”