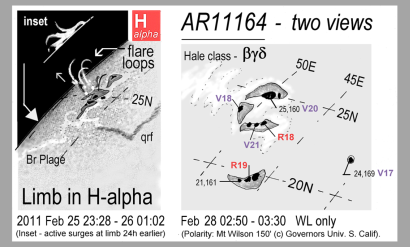 Eye-catching surges, writhing like snakes in brilliant red, were how this strange group announced itself. They were sure pretty – and Helio freeware located them at +19, 178 (19º north latitude and longitude 178º) on the sun’s NE limb, where no spots were seen. It was February 23, 22:36UT – the scene was set for some strange spot activity (Fig, inset).

When next viewed (25th) there was a curiously deformed spot near the site of the surges, at +25, 153 (the difference in longitude is due to the crowding together of lines of longitude at the limb ), and it was clearly active in H-alpha, with small post flare loops emerging from it. The loops renewed themselves at intervals and sub flares lit the site, with a large filament stretched across the scene (Fig). The group was soon tagged by NOAA as AR11164.

A strong M3.5 flare behind the NE limb a day earlier had been assigned to smaller group AR11163 preceding (p) 11164, but I suspect it was in the latter group).

By February 28 (Fig) the group was seen to have a single small (p) spot followed (f) by four large crescent shaped spots with elongated umbrae – suggesting strong linear fields – and with opposite polarity spots in one penumbra (Mt Wilson data) the group was Hale class Beta-Gamma-Delta – the most active, and was to host a GOES M1.1 flare the following night.

Soon new flux (spots and penumbrae) was seen emerging (arrows in Fig, Mar 4, 03:35 – 04:00). While its own small R spots were rapidly growing, a new patch of violet flux was emerging close to the central big R spot – AR11164 was growing a second preceding sunspot!

Cloud intervened, and when next viewed on Mar 7 23:30 (Fig) through brief gaps, the process was complete! The group had “doubled” both its preceding and following spots. It was now a flattened X-shape, with (p) spots of V22 and V21 polarity, and (f) spots of R22 and R20.

Again opposite polarities in one penumbra made it class Beta-Gamma-Delta. And so, on the 7th it hosted three M class flares, the strongest (local predawn) an M3.7 that, it’s claimed, propelled the fastest CME since Sep 2005 (2200km/s)

Zirin in Astrophysics of the Sun (Cambridge University Press, 1986, p333) refers to a “fine spotless flare on July 29, 1973” – the product of new flux arising in an existing group during an earlier rotation, which caused strong flares, and “doubled” the (p) spots. “This is how regions with double (p) spots form” he tells us.

AR11164, however, had doubled both its (p) and (f) spots! An interesting and active group – and one for the record books, perhaps?