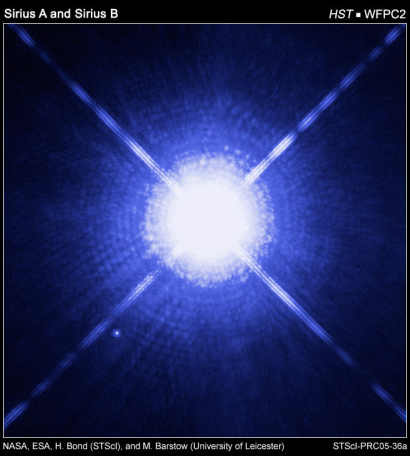 In the Australian autumn the brightest star in the sky Sirius is shining brightly high in the western sky each evening after dusk. Though intrinsically brighter than our own Sun, the main reason for its high apparent brightness in the night sky is that it is a near neigbour at a distance of a mere 8.6 light years from us. On of the distinguishing features of Sirius is that it is a double star with the main star Sirius A accompanied by a tiny white dwarf companion Sirius B that can be seen as the pinpoint of light in the Hubble image above. The companion can also be seen through much smaller telescopes as illustrated by Harry Roberts on this blog.

There are many fundamental questions astronomers want to knows about a star like Sirius A, such as how large and how hot it is. They are not easy to answer as even a telescope like the Hubble Space Telescope only sees the star as a point source of light – on the image above it seems to have a large size but that is purely due to the brightness of the star and the diffraction spikes visible in the image clearly demonstrate that the telescope cannot resolve or make out the disc of the star. 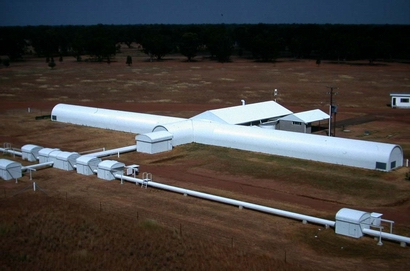 The central portion of the Sydney University Stellar Interferometer (SUSI) at Narrabri. Picture courtesy School of Physics, University of Sydney

In the March 2010 issue of the Publications of the Astronomical Society of Australia there is a new paper on observations of the star by the Sydney University Stellar Interferometer (SUSI). SUSI is a highly specialised instrument that uses small mirrors at widely separated baselines to actually resolve the disc of the star. It does not give an image, but provides measures called visibility that are related to fringes seen as the light from two separate mirrors are combined. By plotting the visibility at different baselines, astronomers can determine the angular size of the star that they are observing.

The research for the paper, The Angular Diameter and Fundamental Parameters of Sirius A was led by the late Emeritus Professor John Davis with five Sydney University colleagues as co-authors who completed the work. The angular size of Sirius A is determined to be the tiny angle of 6.041 thousands of an arc second, which is equivalent to the apparent size of a two dollar coin held up by someone in Melbourne and observed from Sydney.

Knowing the angular size, the other properties of Sirius A can be established. These include the temperature of the star that turns out to be 9845 ± 64 K – here K represents Kelvin or absolute temperature that can be converted to the usual Celsius by subtracting 273. The size of the star is only a little larger than our own Sun, precisely Sirius A is 1.713 ± 0.009 times the width of the Sun. Sirius A’s intrinsic brightness is much greater though at 24.7 ± 0.7 times that of the Sun.

Now if you are outside with friends on a pleasant autumn evening you can impress them by pointing to Sirius and saying, ‘Did you know that star’s surface temperature is 9572°C?’. All thanks to SUSI!

5 responses to “What do we know about Sirius the brightest star in the sky? How hot? How big? How bright? SUSI gives definitive answers”