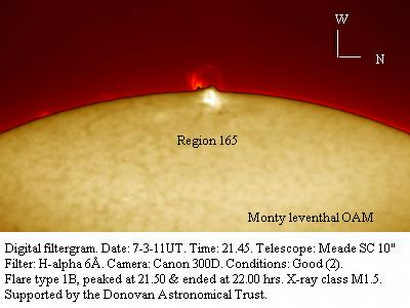 A flare on the Sun at region AR11165 on 7 March 2011 imaged in the red light of hydrogen (hydrogen alpha). Image and copyright Monty Leventhal OAM ©, all rights reserved

While until recently solar activity had been weaker than expected, around March 1 the sun decided to “up the action”! 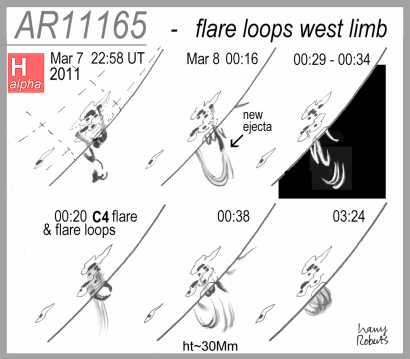 Small post flare loops at AR11165 on 7 March. First drawing made about one hour after Monty’s image of the flare above. Note that the orientation of the drawings is the reverse of Monty’s image. Image and copyright Harry Roberts ©, all rights reserved

By March 7th (UT) the solar disc had six new groups, three of which were Hale class Beta-Gamma-Delta: the scene was set for fireworks! By the end of the 7th a total of seven M-class flares had erupted (certainly a C24 record: three were in AR11164, three in 11165 and one in 11166) – but somehow cloud and time-zone issues prevented any direct sightings, apart from a series of small post flare loops in AR 11165 (Fig), at the SW limb, following an earlier M1.8 flare before sunrise. These loops, though small, showed much of H-alpha interest; sub-flares and a C class erupted at intervals, and fresh loops formed in a variety of shapes.

Four of the more complex groups were mapped, and as March 8th arrived (local 11 am) they were monitored for transients – in AR11165 mostly. Trees ended this session at 00:51UT, and the ‘scope was moved for more viewing two hours later, with hopes of a flare.

Session two was plagued by cloud, with another M1.8 in 11165 being missed. When next viewed, AR11165 again had fresh post flare loops. At 03:40 the GOES 1 Minute data showed a sudden rise, but when searched, all spot sites in the solar north and west showed no flare! After brief puzzlement the ‘scope was pointed to the spotless east limb – where a brilliant flare was found! 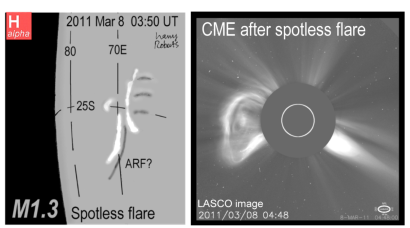 A flare and a Coronal Mass Ejection (CME) from a region of the Sun without spots on 8 March 2011. Image and copyright Harry Roberts ©, all rights reserved (left) and image from the SOHO spacecraft (right)

Most flares arise near obvious spots, and while this site had bright facula (in WL) it was quite spotless. While watching in awe, the GOES Flux rose to M1.3, and stayed bright for an extended period (Fig).

The site (at -24/37 heliocentric) was again checked for spots: there were none. This was the site of February’s X2.2 flare in AR11158. The M1.3 had two bright flare ribbons, well separated, with a filament between at the south end. There were faint “branches” on the (p) side with some plage. An ejecting filament was searched for in the blue “wing” of H-alpha, but not found. LASCO logged a strong CME from the site triggered by the flare (and filament ejection). It was the brightest flare so far logged by the writer for C24. Velocity for CME ~600km/s.

Zirin in “Astrophysics of the Sun”, Cambridge University Press, 1986, p333 refers to a “fine spotless flare on July 29, 1973” – the product of new flux arising in an existing group during an earlier rotation, that caused strong flares, and “doubled” the (p) spots. “This is how regions with double (p) spots form” he tells us. On its return, the spotless region hosted another strong flare. This account closely matches events in old AR11158 it seems – the M1.3 being the result.

Currently, it’s an amazing time for H-alpha sun-watchers (despite Sydney’s cloud) – with so many diverse events occurring on our resurgent star.