NASA engineers plan to insert the MESSENGER spacecraft into orbit around the planet Mercury on Friday 18 March 2011 at 11:45 am AEDT. The video animation above indicates what should happen. Note how the spacecraft fires its engine to slow down the craft just as it is skimming over the surface of the planet. Firing the engine at that point increases its braking effect. Courtesy NASA

Having a spacecraft circling and studying the surface of Mercury is an exciting development. Until now the innermost planet of the solar system has been little known as it had only been visited by one spacecraft, Mariner 10, back in the mid 1970s. Since January 2008 MESSENGER has made three flybys of the planet as a preliminary to going into orbit around it. Within the next year or two scientists expect to add much to our knowledge of Mercury’s magnetic field and how its cratered surface has been affected by volcanic lava. 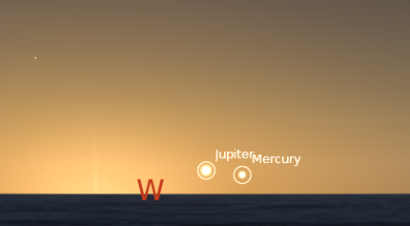 Mercury and Jupiter very low on the western horizon at 7:35 pm AEDT, civil twilight, on Friday 18 March 2011. Diagram made with Stellarium software

Obviously with so much happening with Mercury, it would be interesting to have a look at the elusive planet. For all practical purposes we can say that it is not visible from Sydney or the rest of Australia at the moment. Still for those that are super keen and have access to a clear horizon towards the west there is a chance to see it. As a bonus they may also see the giant planet Jupiter as the two are fairly close together. Jupiter is the brighter of the two.

To try to see the two planets look just above the horizon around the time of civil twilight, which in Sydney on 18 March 2011 is at 7:35 pm AEDT. Binoculars may help, but make sure that you do not start using the binoculars until after sunset.

For those of us seeing the planets so close to the horizon with plenty of light still in the sky is too much of a challenge. So when could you find Mercury under easier circumstances? If you are willing to rise before dawn, Mercury will appear low in the east from the middle of April until the beginning of June. Finally, from the very end of June onwards we will be able to view the planet low in the north-west in the evenings after dusk.