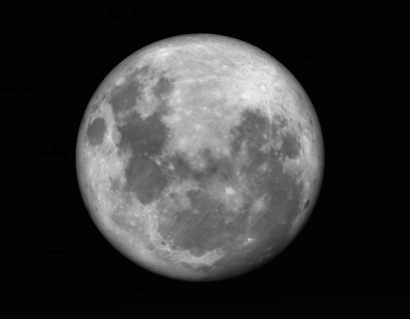 A simulation of the rising nearly full Moon on the evening of 19 March 2011. The large Moon provides a good opportunity to become familiar with its features. On the left is the Sea of Crises, to its right is the Sea of Tranquillity where Neil Armstrong and Buzz Aldrin landed in July 1969 and the compact sea on the far right is the Sea of Moisture. Image from Stellarium software

What’s happening? On the morning of Sunday 20 March 2011 the time of the full Moon will almost coincide with the time of the Moon reaching its closest point to Earth (perigee) in its monthly orbit. Full Moon is at 5:10 am AEDT while perigee is only an hour later at 6:10 am AEDT. Furthermore at this perigee the Moon will be a little closer than usual to Earth.

Should we expect consequences on Earth such as earthquakes? As discussed by Geoff Wyatt in Moonageddon is almost upon us, no disasters are expected as a result. Sadly, earthquakes such as the recent ones in New Zealand and Japan can and do happen, but they do not have an astronomical cause.

Why don’t the times of full Moon and perigee coincide each month? Both full Moons and perigees repeat at intervals of one month, so if they coincide in March you would imagine that they would coincide at subsequent months. They do NOT as there are different definitions of a month. The interval from one full Moon to another is a synodic month that takes 29.53 days on average while the interval from the time of one perigee to the next is an anomalistic month that takes 27.53 days on average. The first of these months, the synodic one, takes longer as it involves not just the Moon circling the Earth, but both circling the Sun.

Why do we have apogees (the Moon at its furthest point) and perigees? The Moon moves around the Earth in an oval-shaped (elliptical) path that can bring it approximately 5.5% closer or take it 5.5% further from the centre of the Earth than its average distance of 385 000 km.

Why is the Moon closer at its March 2011 perigee than at most others? If the Moon circled the Earth without feeling other gravitational pulls than its path would be that of a pure ellipse. However, the Sun also has a strong effect, making the prediction of the path of the Moon highly complex. Many astronomers of the past have dedicated their entire professional careers to studying the orbit of the Moon and developing complicated formulae to predict its motion. More recently, astronomers analyse and predict the Moon’s path on the basis of tables from NASA’s Jet Propulsion Laboratory that are calculated by numerical integration.

Will there be exceptionally high tides on 20 March 2011? At new Moon or at full Moon the Sun and Moon are in alignment so that their tidal effects add up resulting in higher tides than usual. As on this occasion not only is there a full Moon, but the Moon is at perigee we would expect an unusually high tide. Yes, the tidal predictions provided by the Bureau of Meteorology for Sydney Harbour indicate a high tide of 1.87 metres on 21 March 2011 at 10:41 pm AEDT. This is reasonably, but not exceptionally, high. For example, in the following month April 2011 the evening high tide on the day after full Moon is expected to reach 1.98 metres. A possible reason is that there are other terms in the prediction of tides such as the elevation of the Sun and the Moon. On 20 March 2011 the Earth is nearly at the autumn equinox and at that time of the year neither the Moon nor the Sun has a high elevation. If Moonageddon were to happen in December or June, then the tides would be higher.

Thus the Moon’s relatively close approach can be enjoyed without any fear. Ideally, you could watch the large Moon in the western sky just before dawn, say from 5:30 am. However, if like most people you prefer to sleep in on a Sunday morning, have a look at the almost full Moon as it is rising on the evening before, Saturday 19 March. There could be romantic consequences, but for those this blog takes no responsibility!