The first electric light in Sydney

On the evening of January 23, 1868 Sydney was in the grip of Royal-tour fever and a spectacular, but gas powered, light show was underway. Up on the hill at Sydney Observatory an electric arc lamp switched on and it stole the show. “It was the most brilliant object in the illumination…the shadows it cast were noticed by thousands in and about the city and suburbs” -Sydney Morning Herald Feb 1 1868. Both the Duke of Edinburgh and Electric Light had arrived in Sydney.

The lamp was built by the inventive Gustav Kopsch, Chief Mechanic at the Post Office. It lights up when a continuous spark crosses a set gap between the electrodes in front of a reflector. Powered by a battery of 400 cells it had an ingenious mechanism to move the electrodes together as the spark gradually consumed them, so maintaining the gap.

Although the arc lamp has been on display at the Powerhouse Museum for some time it will be ‘coming home’ on March 15, 2011, for two weeks to be one of the stars at the Observatory’s Earth Hour event on March 26,2011.

The consequences of the demonstration are not altogether popular here on the hill. At the time George Smalley, the Government Astronomer, complained about “…the very considerable damage done…” by the battery acid. And today millions of electric lights cast a glowing dome over Sydney, visible from over 300-km away. This wasted light smothers our view of the southern stars. 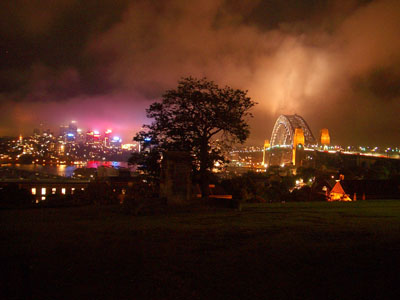