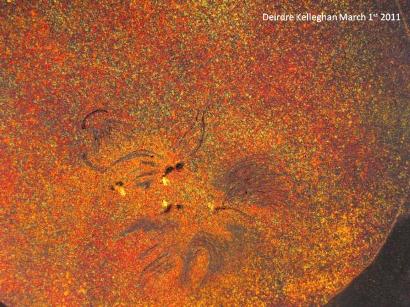 An experimental sketch of Active Region 1164 made on 1 March 2011 with a PST 40 (Personal Solar Telescope) in hydrogen alpha light and a 40 mm TVP eyepiece. Pastel and a craft needle on black paper. Image and copyright Deirdre Kelleghan ©, all rights reserved

I observed Active Region 1164 between 10:46 UT and 11:30 UT on 1 March 2011. I tried an experimental sketch, an attempt to figure out the best media and methods to capture the sun in a sketch. The sunspot group as a whole was more prominent even in h alpha at the tuning point where all other active elements were visible. The main spot was clearly two spots close to each other with one having an elongated umbra. The penumbra for these two large spots was clearly visible when the PST was tuned to the point when only the sunspot group was visible. Long dark clearly malleable filaments danced around the entire area while waves of arcing fibrils heaved their way through the solar atmosphere. At 11:17 UT four brighter areas appeared close to the sunspots. In this sketch I removed material instead of adding it, in my quest to achieve an accurate rendition of what I can see with my eyes at my telescope. 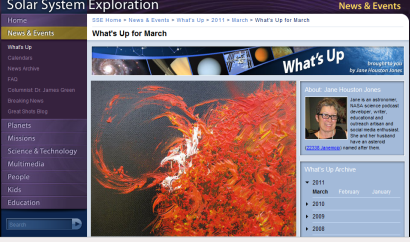 Deirdre Kelleghan is active in Irish amateur astronomy being vice-chair and outreach coordinator for the Irish Federation of Astronomical Societies.