Recently, you may have heard of the term “Moonageddon”. For those that haven’t, it is a nonsense word to describe the end of the world or disastrous events lurking just weeks away.

The world will not end on March 20th. Yes, there may be some event somewhere that people attribute to the Moon but there will not be a causal link just a sad coincidence.

This silliness sprung up because someone noticed that the Moon comes a little closer on the 20th than at other times. It is the result of the 5.5% difference the Moon’s orbit has from that of a true circle, i.e. it’s more like an egg shaped orbit than a circle.

The Moon will be at its closest for 18years but all that does is give us a lovely view of the full Moon during something called perigee. (BTW Perigee comes from “peri” meaning near and “geios” meaning Earth)
On March 20th at 6am it will be just 356,575km away. So how much closer does it come this moonth? The last close perigee was in January 2010 when it was just 18km further away, that’s less than 0.0005% difference but it did come 200km closer in Jan 1912.

As we know the Moon is the main cause of tides on the earth but this small difference has no perceivable effect at all and there is no scientific evidence anywhere to support the claim of stronger tides causing earthquakes.

So what can you do? Well if the world ends max out your credit card, if not, make sure you get a good photo and then compare it against the October Apogee of 406,434km away on the 12th at 11pm. Only then can you clearly see the difference like in this image copied from Wikipedia. 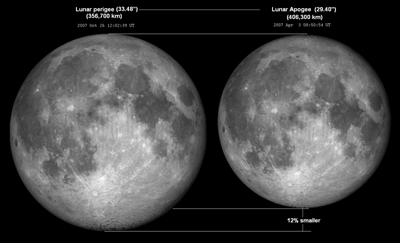 If the world doesn’t end on the 20th and I’m sure it won’t, there will be lots of other disastrous dates ahead especially 21st Dec next year when the current Mayan long count calendar ticks over but perhaps we’ll discuss that next month, maybe.

6 responses to “Moonageddon is almost upon us”

Interface: people, machines, design
This exhibition examines how design has been applied to information technology products; and about how a handful of companies made complicated technology appealing and easy to use.
ExhibitionPermanent Exhibition