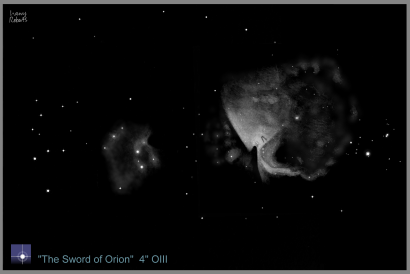 A sketch of the region of the Sword of Orion, including M42 the Orion nebula, with a 4-inch (10-cm) telescope and a filter for the green light emitted by double-ionised oxygen atoms (OIII). Image and copyright Harry Roberts ©, all rights reserved

The Sword of Orion is probably astronomy’s best known feature – one that’s been remarked for eons – and since the invention of the telescope, the most common target perhaps. Its concentration of bright stars, star clusters and nebulae is unique in the night sky.

A while back I began to sketch what was visible of the Orion nebula in a small ‘scope – and the task grew to sketching the whole “Sword” region. It was to take quite a while.

After previously sketching the Orion Nebula (M42 and M43) with a C8 and 10” ‘Dobson’ the nebula was attempted with a 4” Maksutov – to resolve how much could be seen with a “small” ‘scope at an urban site. It was more than the writer had imagined – particularly when an OIII filter was used.

The nebula was sketched using the same method as before – seated at the eyepiece with a dark head covering; a red book light lit the sketchpad. Notes were added and detailed sketches made, later incorporated into a final drawing. The features north and south of the nebula were made on other nights – and they are all interesting features in their own right – star Iota Orionis, for example, is a fine multiple star. The “Running Man Nebula” north of M42 is very faint and was tackled on three separate nights before its details were resolved.

The “Sword” region contains various fine details with a huge brightness range, much of which is hard to ‘capture’ in a drawing. In the eyepiece, of course, stars are tiny brilliant points – but in the sketch they must be drawn larger to appear brighter – much as stars ‘bloat’ in astro-photos.

Orientation: as digital displays are in “horizontal” format the “Sword” is oriented with north left and south to the right – approximating the binocular view as Orion rises in the southern hemisphere. The three naked-eye stars of the Sword appear in the sketch, from right to left, they are Iota, Theta and 42/45 Orionis.

Final Image: The viewing was completed over December and January last; compiling the scans into a mosaic took a while. The completed “Sword” is not yet annotated – but the drawing is presented at this stage to show what can be seen in a four-inch telescope of the brightest nebula in the night sky, and its stellar surroundings.

3 responses to “Harry sketches the Sword of Orion: the richest concentration of stars, star clusters and nebulae in the night sky”