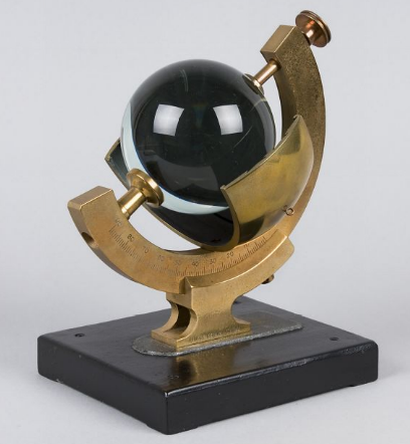 A Campbell-Stokes sunshine recorder first used at Sydney Observatory in the late 19th century and now on display there in the Observing the weather exhibition. Powerhouse Museum

Sydneysiders have had to cope with some hot weather recently. How much sunshine is there? The Bureau of Meteorology does not seemed to have released the figures for February as yet, but for January 2011 it states ‘Sydney Airport recorded an average of 7.6 hours of sunshine per day during this month, which is average for January.’ Melbourne recorded the same average hours of sunshine in January, but there it was less than the climate average of 8.1 hours.

Sunshine is recorded with a simple, yet clever device, called a Campbell-Stokes recorder, the design of which goes back to 1879. In this device a glass sphere concentrates sunlight onto a card and the amount of scorching on the card records the amount of sunlight that had fallen on it. An ordinary lens would be unsuitable for as the Sun moves across the sky sunlight would hit the lens at varying angles. To only way to use a simple lens and still receive a meaningful result would be to make the lens follow the motion of the Sun across the sky from east to west, but that would be a much more complex device.

As discussed here, it is a relatively simple matter to trace the path of a beam of light inside a glass sphere. As the light hits the sphere it is bent by an amount depending on the angle with which with it hits and and a quantity called the refractive index of the glass. The light then leaves the reverse side of the sphere with the same angle with which it hit at entry. Assuming a refractive index of 1.5 for the glass, the beam is focussed at a point 3/4 of the diameter of the sphere from its centre. Alternatively, we can say that it is focussed at a distance of 1/4 of the diameter from the nearest glass surface.

A close-up of a card for a sunshine recorder. Note the scorching evident above the dates. Courtesy Wikimedia Commons

The card for recording must be placed at that distance of 1/4 of the diameter or width of the sphere from its surface. As the Sun traces out different paths in the sky during the year – higher in summer and lower in winter – the cards have to be placed at different positions depending on the season. Normally, there are different cards as well, for summer, winter and times near the equinoxes. These cards are not just ordinary paper, but they need to be treated so that they scorch instead of burning. As well, they need strength even when wet as the cards are exposed to rain and would be useless if they disintegrated when collected on a wet day.

The recorder shown above was originally used at Sydney Observatory, which began weather recording in NSW, and later was passed on to the newly formed Commonwealth Bureau of Meteorology. It was made by Rudolf Fuess of Steiglitz, Berlin, Germany sometime after 1892. Interestingly, while Fuess was learning his craft he spent sometime in Hamburg with Hugo Schroeder, who made Sydney Observatory’s large lens telescope that is still operating in the south dome. Maybe that connection led to the Observatory placing the order for the sunshine recoder with Fuess. The Bureau of Meteorology apparently stopped using the sunshine recorder at a time when suitable cards for recording were difficult to obtain. There is more information on the Powerhouse Museum collection database.

So yes, it is possible to catch sunshine and you do not even need to go the beach to expose your skin cells to sunburn and damaging ultraviolet rays!

5 responses to “How do you catch sunshine? Use a Campbell-Stokes sunshine recorder!”