I captured this image of a parhelion (sundog) on 24th February 2011 with the camera in my iPhone 3GS at Engadine. 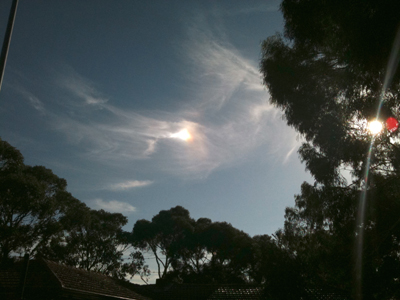 The Sun is seen shining through the eucalyptus tree at right in the frame (with a red internal reflection within the camera lens beside it). The parhelion is almost at centre. The vertical streak through the Sun is spurious and probably caused by the leaves of the tree hanging vertically.

Adapted from Wikipedia: Parhelia may appear as a colored patch of light to the left or right of the Sun, 22° distant and at the same distance above the horizon as the Sun. Sundogs are made commonly of plate-shaped hexagonal ice crystals in high and cold cirrus clouds or, during very cold weather, by ice crystals called diamond dust drifting in the air at low levels. These crystals act as prisms, bending the light rays passing through them with a minimum deflection of 22°. If the crystals are randomly oriented, a complete ring around the sun is seen — a halo. But often, as the crystals sink through the air they become vertically aligned, so sunlight is refracted horizontally — in this case, sundogs are seen.

As the sun rises higher, the rays passing through the crystals are increasingly skewed from the horizontal plane. Their angle of deviation increases and the sundogs move further from the sun. However, they always stay at the same elevation as the sun.

Sundogs are red-colored at the side nearest the sun. Farther out the colors grade through oranges to blue. However, the colors overlap considerably and so are muted, never pure or saturated. The colors of the sundog finally merge into the white of the parhelic circle (if the latter is visible).

My image doesn’t show it very well (the red part isn’t too bad), but wearing Polaroid sunglasses the spectrum as described above was easily visible as was a short section or arc of parhelic circle above and below the parhelion (it is hinted at in the photo).

Wish I’d had my 40d with a polarising filter there – the image would have been much better!