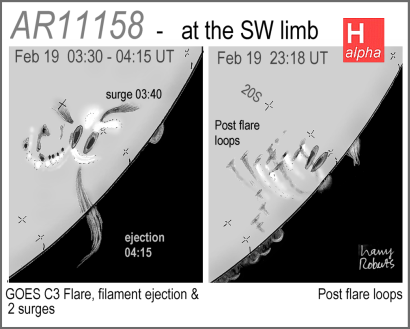 The sunspot group AR11158 at the western edge of the Sun drawn 20 hours apart on 19 February 2011. Image and copyright Harry Roberts ©, all rights reserved

AR11158 put on a fantastic spectacle for H-alpha users – but heavy cloud foiled most attempts to see it.

Some H-alpha phenomena are bright, while others are dark. Filaments that cluster around sunspot groups (ARF) are usually dark until they rise above the limb, when they seem bright against the sky’s blackness. The enigmatic surges, plasmas collimated by closed fields, are also mostly dark when on the disc, but can be bright too, particularly where they emerge on the surface – their temperature is about 8,000ºK.

Flares are always bright, typically 40 million K – and they emit a sudden flux of X-rays, which sun watchers can monitor (under cloudy skies). Flares occur mostly in sunspots of the most energetic kind, i.e. Hale class Beta-Gamma-Delta. AR11158 attained this class around Feb 17th.two days after hosting the strongest flare of SC24 a GOES X2.2 (and several M-class). 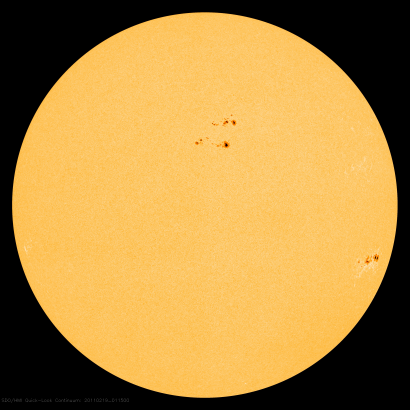 The full Sun on 19 February 2011 with sunspot group AR11158 near the right hand edge of the Sun. Courtesy SDO/HMI, from Spaceweather.com.

As AR11158 neared the western limb cloud gaps allowed some glimpses of events – and the figure shows two views made 20h apart on Feb 19th (UT). The left hand image shows events between 03:30 – 04:15UT. The flare shown, a GOES C3, had fallen to C2 when viewing began – and was brightest above the two principal (p) spots, with a bright chain of sub-flares edging the string of small spots following (f) the main group.

Some ejection events are recorded – with a (presumed) dark surge at the (p) end of the group at 03:40UT. Also above the limb a complex faint prominence was slowly evolving, and at 04:14 was recognised as a filament seen dark against the disc and bright where it rose above the limb – a slow filament ejection resulting from the flare maybe. Cloud ended the session soon after.

The next session (19th 23:18 – 20th 00:48UT) shows the group ten degrees closer to the west limb, a highly compressed view. We now see the group two hours after a C2 flare – and although faint, both bright and dark post flare loops are seen, emerging from small spots on the disc. Few reach above the limb – and where they do, show as faint prominences. These loops are around 40 Mm in height.

There were no obvious active region filaments within this group – nor had they been seen in earlier views, something the writer feels is anomalous. ARFs are usually numerous in such sunspot groups; where were they?