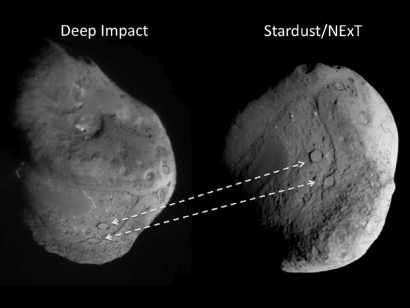 Comparison between the 2005 Deep Impact image of Comet Tempel 1 and the February 2010 image from the Stardust/NExT spacecraft shows the fantastic navigation of the latter craft. Image from NASA, courtesy NASA/JPL-Caltech/University of Maryland/Cornell

Comet 93P/Tempel 1 was discovered by Wilhelm Tempel on 3 April 1867 from Marseilles, France. It is a short period comet that circles the Sun between the paths of Jupiter and Mars every 5.5 years. The comet’s central nucleus is about six km wide and spins around its axis in about 41 hours. The spinning nucleus is fairly dark, reflecting about 1/20 of the light falling on it.

Until 2005 the comet circled peacefully and undisturbed around the Sun. In that year NASA’s Deep Impact spacecraft went past and hit the nucleus with an ‘impactor’. A cloud of dust and ice was raised from the surface hiding the impactor’s effect.

To revisit the comet in order to see the impact site is of obvious interest. In a clever and opportunistic move an old NASA spacecraft named Stardust was redirected to go past the nucleus of Comet Tempel 1 to give us that second look. The spacecraft made its flyby just before 3:40 pm AEDT on 16 February 2011 at a distance of 178 km. As it went past it took 72 images.

There was a small glitch in transmitting the images to Earth after the encounter as the ground controllers wanted to first see the images at closest approach while the spacecraft decided instead to send all images in chronological order. Fortunately, this was the only glitch and it had no importance except in prolonging the anticipation of the scientists involved by a few hours. 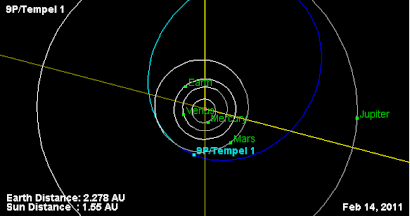 The orbit of Comet Tempel 1 and its location at the time of Startdust’s flyby. Diagram from JPL Small Bodies Browser

At this morning’s (16 February 2011) press conference the great effort in getting the spacecraft to the comet at the right distance and the right time was emphasised. It needed to be at the right time so that it could image the area impacted by Deep Impact five years ago. As the comet’s nucleus is spinning and this spin was not fully understood, scientists organised an international campaign over the last few years to observe the comet and define its spin.

The navigation was spot on so that the area of the impact, which was between the craters highlighted in the top image, was visible to the camera on the spacecraft. As anticipated a crater was seen, about 150 metres wide, but fairly ‘subdued’, possibly from the ice and dust falling back after the impact. Just like on many Moon craters, there is a mound on the floor of the crater.

All in all, the encounter with Comet Tempel 1 was a great success. Over the next few days we are likely to get more details and then to find out more we will need to wait until the resulting scientic papers are published in a year or two.