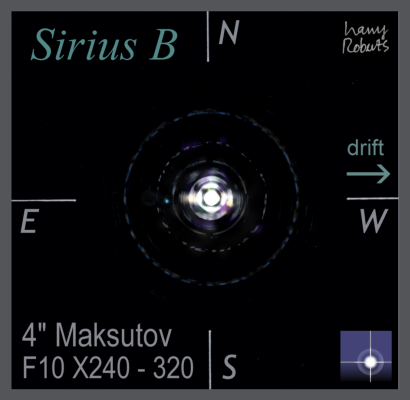 Sketch of the bright star Sirius and its white dwarf companion Sirius B, as seen in a four-inch (10-cm) Maksutov-type telescope. Image and copyright Harry Roberts ©, all rights reserved

Sky-watchers today are having a ‘good run’ – a second transit of Venus is due soon, we’ve seen comets collide with Jupiter (more than once), supernovae have burst forth – and big ‘scopes can now be had for less than a week’s income.

Another bonus event is the steady widening of the (hitherto) elusive companion of Sirius, known as Sirius B or the “Pup”. Visual astronomers love challenges of all kinds, and seeing Sirius B is one such challenge. It is a rare star, a white dwarf, and at visual magnitude 8•3 should be easy to see, right? It would be – but for the overwhelming glare of the nearby primary Sirius A, the brightest star in the night sky. Right now is the best time to tackle this object, as its separation from the primary is increasing rapidly, and will widen until 2025.

A year ago I was happy to “find” Sirius B in the C8 (using red filters) and once firmly located it became “easy” to see in both the C8 and ten-inch Dobson, so long as the seeing was “good”. Some eyepieces were better than others; an old 6mm orthoscopic proved the best (no ghosts in the FOV). Recently Mel Hulbert saw Sirius B in her five-inch refractor, and larger refractors are probably the best performers for looking directly at bright stars. Since I don’t own one, I was prompted to try with the 4” Maksutov.

The Soviet-era Maksutov (a tele-lens really) has the secondary cemented to the corrector (the better design) and has always performed well, with very compact Airy discs compared to the bigger ‘scopes. Of course it grabs much less light too. How would it go on Sirius B?

On almost the first try the ‘Mak’ split the Sirius double. The night was hot and west winds had cleared the summer humidity; seeing was fair to good (and improving). The sketch shows the view – the Maksutov brought the light to an Airy disc with just 4 to 5 diffraction rings around it. Minor defects were “flares” of refracted light with some colours, and faint outer rings around the Airy disc at a distance –scattering off baffles maybe. The small bluish dot of Sirius B was seen well clear of the central diffraction rings. It often blended with one of the outer rings, but as it lay due east of Sirius A it was easy to find and ‘hold’ (Sidereal drift is due west).

The ‘scope’s 1000mm focal length meant higher magnification was needed, and an 8mm König ep and 2X Barlow (250 times) did the best job (Fig) – and shows that small ‘scopes can now ‘split’ this famous double.

Seeing Sirius B in bigger ‘scopes may be harder – “Dobs” are efficient, but if yours is more than 10 inches aperture, “stop down” to say 8 inches (cardboard mask); there’s plenty of light available! The reduction should better show Sirius B. And with refractors, SC’s or Mak’s use NO diagonal for a sharper view – also it’s better to be seated at the eyepiece than standing, or worse, hanging from a ladder!

Remember, Sirius B has the same separation as Rigel B, about 9” arc – but is fainter at magnitude 8.3 than Rigel B at 6.7. Try Rigel first – if cleanly split then tackle, say, Zeta Orionis – it’s magnitudes 2 and 5.5 with just 2.6” arc separation. Split these doubles – and you will split Sirius B!

2 responses to “Harry manages to see the faint companion of the bright star Sirius, the white dwarf Sirius B, through a small telescope”